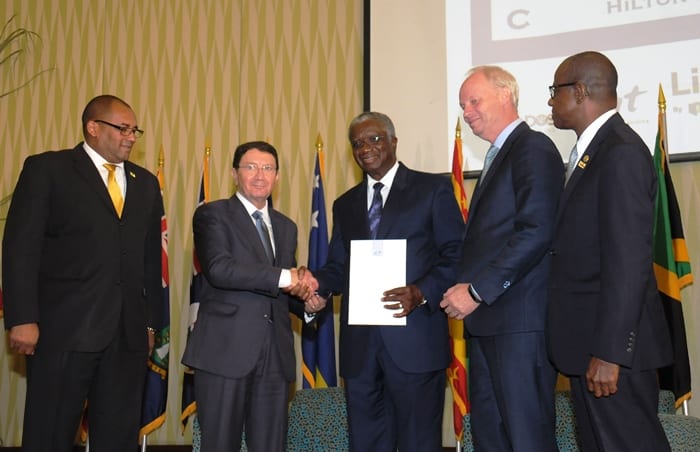 Governments must establish and facilitate effective regulations and mechanisms to encourage private sector-led investment and the adaptation of technological and innovative solutions in the tourism sector.

According to Prime Minister Freundel Stuart, this would assist in developing their tourism industries and economies.

Mr. Stuart expressed this view today after he was presented with the Open Letter on Travel and Tourism at the State of the Industry Conference at Hilton Barbados Resort. He noted that recent indicators associated with global tourism underscored the significant value the sector adds to the world economy.

Mr. Stuart stated that international tourist arrivals grew by 4.6 per cent in 2015 to 1,184 million and generated US$ 1.5 trillion in export earnings. He added that growth in international tourist arrivals for 2016 has been forecasted for between 3.5 per cent and 4.5 percent. Travel and tourism, he pointed out, accounts for 30 per cent of global exports of services and contributes 9 per cent of global GDP.

The Prime Minister stressed that sustainable economic growth must be encouraged by creating decent jobs that have viable linkages across other sectors such as agriculture, thereby addressing and alleviating issues relating to poverty and unemployment.

He pointed out that it was their responsibility to devise feasible methods and processes to leverage the dominance of the travel and tourism industry. He suggested that the presentation of the Open Letter by the United Nations World Tourism Organization and the World Travel and Tourism Council was a step in the right direction.

Mr. Stuart told the participants that the issues presented in the conference should be used to formulate workable solutions to tackle challenges in the industry and the region.

He identified some of those issues as the persistent vulnerability to external economic shocks, providing quality accommodation, establishing reliable and affordable air transportation partnerships and threats to the health and security of citizens and travelers.

Eighty-two Heads of State and Government, including Bahamas, the Dominican Republic, Haiti and Jamaica, have already received the Open Letter in acknowledgement of the relevance of travel and tourism in facing today’s global challenges.