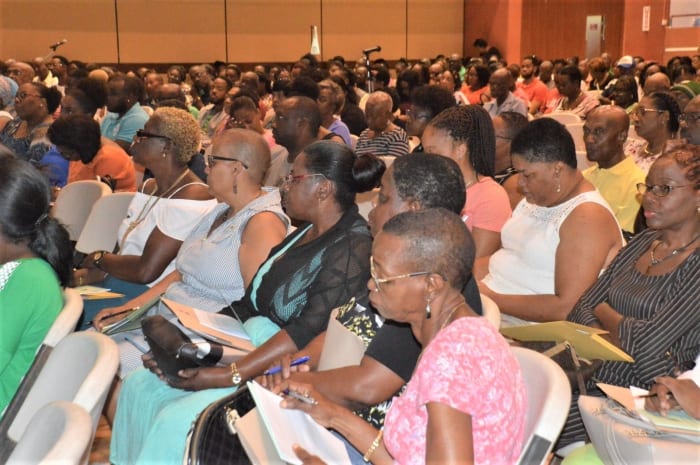 Some of the persons being trained to work on election day. (Electoral Department)

Preparations for Barbados’ General Elections, which will be held on Thursday, May 24, are going well, with the staff of the Electoral Department working around the clock to complete necessary tasks to ensure things go smoothly on the day.

This disclosure has come from Chairman of the Electoral and Boundaries Commission, John Haynes, who said the organisation had done all of its preparatory work for the General Elections.

“The Electoral Department has done all that is required with regard to its mandate to have elections conducted in this country. We have already procured all of our election materials, equipment and supplies, as well as completed the training of election workers, and identified polling stations and counting centres,” Mr. Haynes explained.

He added that the bags with the supplies, which were used by the returning officers on Nomination Day, had been prepared ahead of time. According to him, Nomination Forms had been forwarded to the political parties for distribution to their candidates. He explained that candidates were allowed to go to the Nomination Centre with their forms completed or to complete the forms with the returning officers at the centre.

Mr. Haynes pointed out that when the Revising/Registration Centres closed on Monday, May 7, the Electoral Department would continue to investigate the applications for registration and change of residence and the Register will continually be updated until the Register for Elections is published on May 18.

He stated that within a few days, registered electors would receive election circulars informing them of the location of their polling station.

Meanwhile, Mr. Haynes said on election day, the polling booth would now be positioned so each voter would enter with his or her back to the Presiding Officer.

“This change is to allow the Presiding Officer to see that voters are not using any concealed electronic communication devices,” he explained. However, he gave voters the assurance that they would have privacy, and the secrecy of the vote would be maintained.