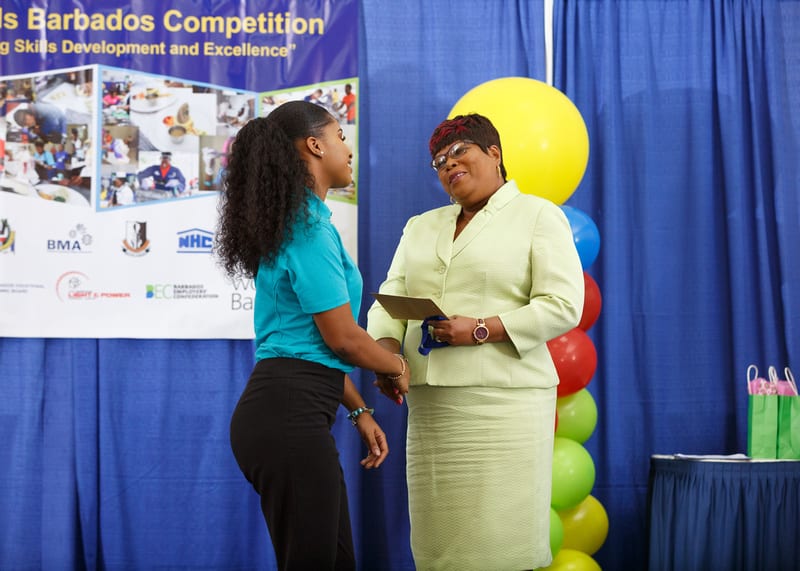 Chief Education Officer, Ministry of Education, Technological and Vocational Training, Karen Best, presenting ​medals to some of the awardees during the ceremony. (TVET Council)

The Ministry of Education, Technological and Vocational Training sees the promotion of skills development and excellence as a core part of its mandate.

Speaking at the Closing and Awards Ceremony for the Barbados World Skills Competition 2018, Minister Santia Bradshaw said she supported the TVET Council’s “strategic decision” to use the WorldSkills programme as a platform to promote and create a path towards 21st century competitiveness, economic growth and the social development of Barbados.

“To that end, there will be a greater drive to ensure that the TVET curricula at the secondary, post-secondary and tertiary levels is based on occupational standards that reflect the national, regional and WorldSkills standards. In other words, it will be competence-based, which is in keeping with international best practice.

“And, I want to stress that by virtue of its tripartite structure, which includes trade union, government and private sector representation, the TVET Council will continue to work closely with all sectors of the economy and labour market to ensure that this country has a workforce that is trained, skilled, certified, competent and competitive locally, regionally and internationally,” she stated.

Ms. Bradshaw added that under her Ministry, the TVET Council would also continue to strengthen partnerships with corporate Barbados to host and/or facilitate the WorldSkills competitions, which include the local WorldSkills Barbados, the regional WorldSkills Americas and WorldSkills International, the latter of which sees 70-plus countries from across the globe competing to determine the best young, skilled professionals and by extension the ‘world class’ training systems that produced them.

The Education Minister said that Barbados’ participation in WorldSkills International, held in Abu Dhabi in 2017, gave those who took part a wealth of experience in determining how much more work needs to be done to develop the local training system and “enhance the competencies and competitiveness of our local workforce”. 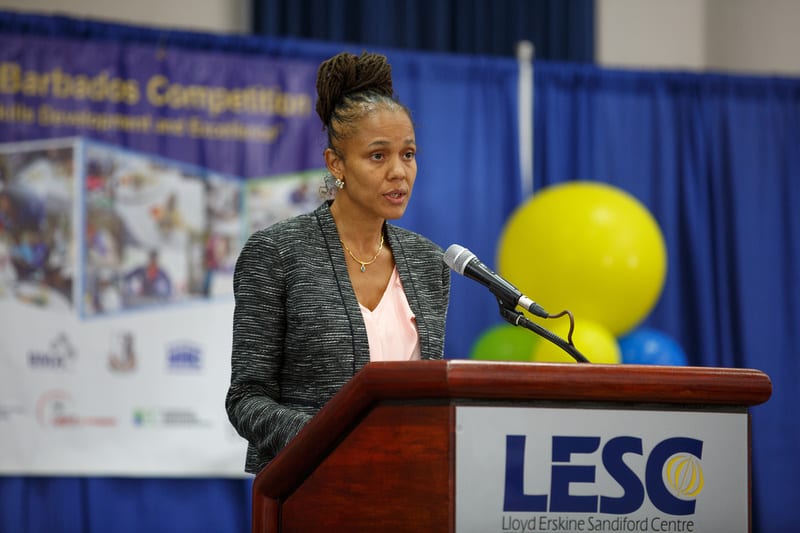 Meanwhile, Executive Director of the TVET Council, Henderson Eastmond, disclosed that the training body would be introducing a number of initiatives to help achieve its vision to be “the premier catalyst for workforce development in the region”.

These include: a competence-based Bachelor of Education Degree in Technological Education and Training; the establishment of a TVET monitoring system and the implementation of a sustainability in TVET programme “to ensure that economic growth, social inclusion and environmental conservation form part of the foundation of the national TVET system”.

Additionally, he shared that in October, this year, the Council was planning to host a national TVET youth forum, which would see the opinions and needs of the youth being integrated into a revised national TVET policy which is being developed by the Council.

The awardees for the evening were Brandon Chandler, Jaron Bowen and Chad Hartley who placed first, second and third, respectively, in the Automotive Technology category. In Beauty Therapy, first place was awarded to Gabrielle Crooney; second place to Ariyun Best-Weatherhead; and third to Letilia Selman.