Employers Urged To Invest In Workers 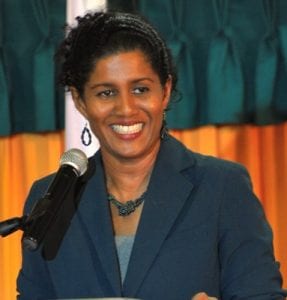 Minister of Labour, Senator Dr. Esther Byer Suckoo, has lauded the management of Ocean Two Resort and Residences for taking the initiative to launch a training centre for its employees.

The centre, which was officially approved by the Technical and Vocational Educational and Training (TVET) Council on March 10, 2015, was instituted to enhance the personal and professional skills of the resort’s staff.

Speaking during the official launch of Ocean Two’s Caribbean Vocational Qualification (CVQ) in Customer Service this morning, the Minister said that too often, workers were left at the bottom of the “totem pole”.

However, she stressed that Barbados’ people was its “most valuable resource”, and it would be remiss of employers not to train their staff.

“Too often, I have seen employers invest their money in upgrading their plants and equipment… but they must start seeing workers as their most valuable asset…

“It is important then that employers follow your lead and continue to invest in workers, training and certification…so that we know our workers are competent,” she maintained.

While noting that “life-long learning” was now an asset in today’s workforce, the Labour Minister told those gathered that the onus was on them to upgrade their skills and ensure that they remain relevant.

And, with the TVET Council offering NVQ and CVQ certifications in over 54 areas of study, she further encouraged the workers to grasp every opportunity.

Following the Customer Service CVQ, which is expected to culminate after a nine-week training period, the Ocean Hotels Group will also offer its members an opportunity to become certified in a variety of other areas relevant to their industry.

These include Level 1 and Level 2 CVQs in Bar Service; Food and Drink Service; Food Preparation and Cookery; Housekeeping; Leadership; Management; and Reception.

Group General Manager of Ocean Two Resort and Residences, Patricia Affonso-Dass; and Executive Director of the TVET Council, Henderson Eastmond, were also in attendance at the launch.