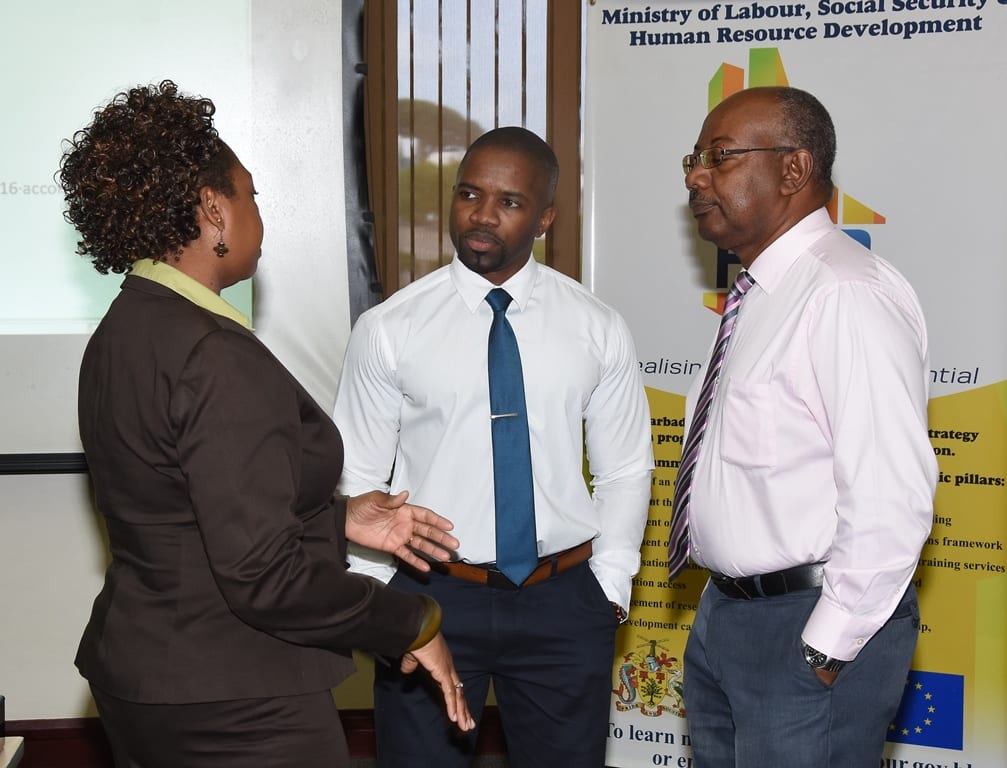 Programme Officer in the HRDS Unit of the Ministry of Labour, Moreen Bowen, discussing the update of BARSOC with local consultants Shane Howell (centre) and Peter Downes of Profiles Caribbean Inc. (C.Pitt/BGIS)

The energy sector is poised for significant growth, which could increase avenues for employment in the future.

This was revealed recently by Chief Operations Officer (COO) of Profiles Caribbean Inc., Shane Howell, as he delivered the findings of a survey carried out by his agency on various sectors of Barbados’ economy, including tourism and hospitality, education, agribusiness and agricultural technology, manufacturing, medical technology and financial services.

The disclosure of the survey findings brought to an end a consultancy commissioned by the Ministry of Labour to update the Barbados Standard Occupational Classification System (BARSOC).

This system is a key tool through which young persons, human resources professionals and guidance counsellors, in particular, can gain valuable information to assist in career development. Over 130 public and private sector companies were surveyed in the process.

The overall objective of the consultancy was to enhance the ability of the Barbados Labour Market Information System to provide relevant, timely and accurate information that would inform decision making in a demand-driven education and training system; and contribute to the effective planning of a dynamic, efficient labour market.

The consultancy commenced in October 2015, and was undertaken by international consultants GFA Consulting Group, in collaboration with Profiles Caribbean Inc. It was funded by the European Union under the HRD Strategy Programme.

Addressing key stakeholders from the private and public sector, as well as representatives from non-governmental organisations, Mr. Howell explained that the energy sector was composed of oil and gas, traditional non-renewable and alternate sources of energy.

“A variety of positions in specialised areas of renewable energy, chemical engineering may add to the landscape of electrical and mechanical engineers who will continue to be needed,” he stated.

However, the COO noted that a number of support roles such as business development and economist resources trained in energy analysis would be required. Mr. Howell also pointed out that the agriculture sector presented “an interesting perspective”.

“There is definite agreement that opportunities exist within this sector for biologists, nutritionists, agronomists and various specialised resources who would add significant value to truly transitioning agriculture to a greater commercial scale. However, there is still a large subsistence type of approach to farming. Support has come from some of the associations and representative bodies but more has to be done to raise the profile of the industry to attract the types of resources that can not only sustain but catapult the industry,” he advised.

In terms of the tourism industry, the COO reported that as Barbados entered new markets in Latin America, Europe and the Asian Pan continent, persons who were skilled in Spanish, Mandarin, French and other languages would be desirable.

“This was also a major point made in the finance sector and especially among the offshore players, where expansion within these markets is ongoing. The reality is that at a time when relationship building is at the core of business, the cover from the ‘mental security blanket’ that English will remain the language of business is being removed, as the ability to speak in the native tongue of business partners better lends to relationship building,” Mr. Howell emphasised.

He added that financial organisations were still continuing to recruit persons with compliance, legal and risk management skills. “As the international climate continues to shape our local response and requirements from the Central Bank, these emerge as key areas for growth,” Mr. Howell said.

BARSOC provides a common classification reference for categorising data by occupations across all statistical sources in Barbados. The system is primarily used by the Barbados Statistical Service in the conduct of the Continuous Household Sample Survey to disaggregate the labour force into occupational categories.

However, it also provides comprehensive occupational profiles, which define the skills and qualifications required, tasks involved and related job titles. It has therefore become a valuable reference tool for a number of labour market information users.