Enhanced Barbados Japan Relations A Plus 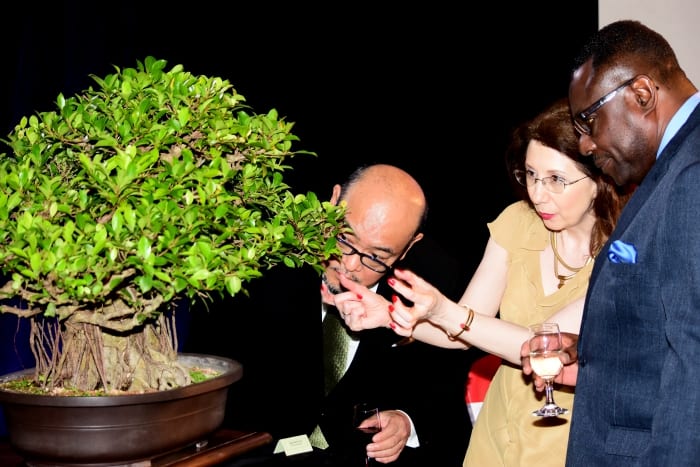 From left to right: Japan’s Ambassador to Barbados Teruhiko Shinada; and his wife, Professor Dragana Mitrović and Acting Minister of Foreign Affairs and Foreign Trade, Steve Blackett admire a Tiger Bark Ficus during a reception at the Accra Beach Resort to celebrate the 84th birthday of the Emperor of Japan, Emperor Akihito. (C.Pitt/BGIS)

The establishment of a resident Japanese diplomatic presence in Barbados has led to enhanced diplomatic relations between Tokyo and Bridgetown.

Acting Minister of Foreign Affairs and Foreign Trade, Steven Blackett, praised the strong friendship which spanned five decades during a reception in honour of the 84th birthday of the Emperor of Japan, Emperor Akihito, at Accra Beach Resort and Spa last night.

He told the gathering of diplomats, government officials, Japanese Embassy staff and other well-wishers that 50 years of friendship was a tremendous achievement.  This alliance, Mr. Blackett stated, had been strengthened by cooperation in areas such as education, climate change, renewable energy, the arts, sports, technology, agriculture and disaster management.

Mr. Blackett said since the establishment of the Embassy, Ambassador Teruhiko Shinada had worked tirelessly to ensure that Japan’s culture was evident and understood by all Barbadians. He wished Mr. Shinada well in these efforts and pledged Barbados’ on-going co-operation.

“On this current trajectory, I expect that there soon will be many more speakers of the Japanese language in, and from Barbados,” he remarked.

The Acting Foreign Minister noted that despite the vast differences in size and populations, Barbados and Japan had common aspirations and challenges.

“These include our interest in conservation, energy security and climate change.  As we continue to work at both the bilateral and multilateral levels to strengthen our co-operation regarding these important issues and to bring international attention to the special vulnerabilities facing small island developing States, I believe it augurs well for our future relations,” he stated.

Meanwhile, Ambassador Shinada lauded the long-standing relationship between the two countries so far, adding that these achievements could not be realised without the cooperation of the Government of Barbados, institutions and the citizens of Barbados.