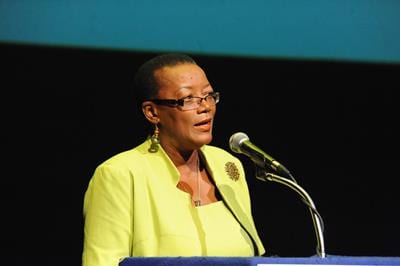 Risk taking, innovation and investment are encouraged as the entrepreneurial ecosystem evolves in Barbados.

This was expressed by Minister of Foreign Affairs and Foreign Trade, Senator Maxine McClean, at the launch of the Caribbean Innovation Competition (CIC) 2017, held this morning at the Inter-American Development Bank (IDB), Maxwell, Christ Church.

During the keynote address, Senator McClean underscored the importance of entrepreneurship to the nation’s development and lauded the continued growth and impact of the CIC.

She stated, “CIC 2017 being launched today adds an important element to what I would describe as an evolving entrepreneurial ecosystem in Barbados and the Caribbean…and I believe that the developments over the past quarter century are replicated across the region.”

While acknowledging former entrepreneurial programmes that helped to shape the current environment, the Minister also recognised the importance of fostering an “enterprise culture”.

“When I talk about an enterprise culture, I simply mean a society or environment in which personal achievement, the earning of money and the development of private enterprise are encouraged. At the end of the day, that is what we are seeking to do, create wealth and empower our people”, she explained.

Senator McClean added that there were clear roles and responsibilities involved in developing such a culture, and alluded to the factors that would enable an enterprising environment.

The Minister stressed: “There must be provision of the necessary education and training, the requisite legislative and regulatory framework, the provision of financial resources and access to social capital.”

The CIC forms part of a joint initiative through the IDB, the Organisation of American States, the University of the West Indies, the Young Americas Business Trust, and the Corporate Affairs and Intellectual Property Office. It acts as an international support and accelerator programme for entrepreneurs.