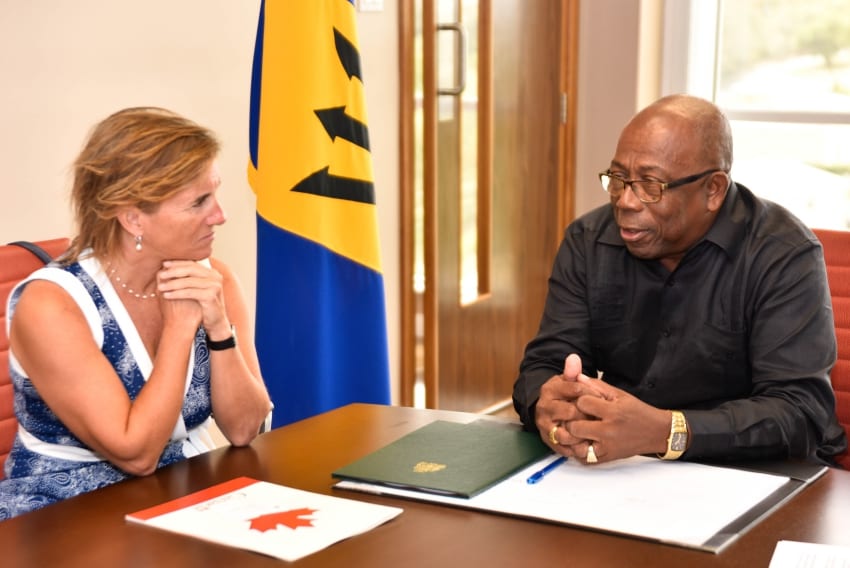 Minister of Environment and National Beautification, Trevor Prescod in discussion with Canadian High Commissioner, Marie Legault during a courtesy call on Monday in the Ministry’s Conference Room. (E.Walker/MRD)

“Canada has been a very good friend to Barbados, we deem it a special privilege, this friendship, and hope to forge stronger bonds”, Minister of Environment and National Beautification, Trevor Prescod stated, as he was paid a courtesy call by the Canadian High Commissioner, Marie Legault.

Minister Prescod engaged the High Commissioner on several topics including recycling, coral and marine life, climate change, the Ministry’s gully cleaning project, development of a botanical garden and use of micro plastics; during the courtesy call on Monday, July 30 in the Ministry’s Conference Room.

Ms. Legault said that she was happy for the discussion, especially on micro plastics and recycling and expressed great interest in collaborating with the Ministry as well as the Ministry of Education, Technological and Vocational Training on a project involving schools. “If you really want to change culture it has to start in the schools,” she commented.

The High Commissioner also noted that the environment was a strong priority for Canada and that culture change took time and the necessary tools such as persuasion coupled with legislation and making it fun.

Mr. Prescod highlighted Canada’s vast expertise on the subject matters discussed and requested of Ms Legault, her country’s assistance in helping Barbados transition from ideas to implementation of the programmes necessary to affect positive change on the environment.

He concluded by stating that on his visit to Canada, he had noticed no litter and he lauded the country’s efforts at such an achievement.  He expressed the hope that Barbados would mimic such a practice.  Therefore, he said he hoped to form an action-oriented bond and work assiduously with Ms. Legault in achieving this goal.

During her visit Ms. Legault was presented with the Ministry’s recently launched waste buster game.