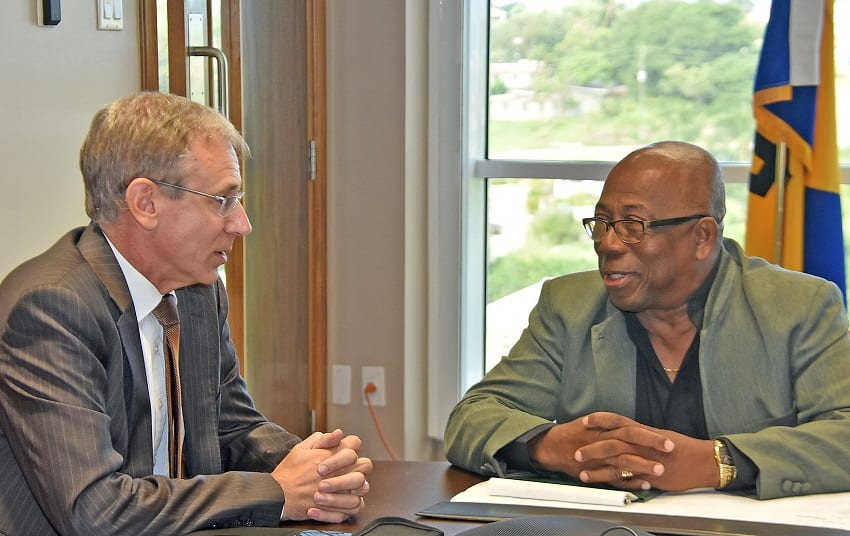 Minister of Environment and National Beautification, Trevor Prescod and New Zealand’s High Commissioner to Barbados, Anton Ojala, in discussion during a courtesy call today at the Ministry of the Environment in Warrens, St. Michael. (C.Pitt/BGIS)

With continuous interaction and dialogue, Barbados hopes to continue and enhance its relations with New Zealand.

The two officials focused on the issue of climate change, with Minister Prescod stating that he hoped the two countries could have technical cooperation on this matter,  as “we grapple with the situation and seek to mitigate those challenges we are currently experiencing that threaten our future environmental development”.

High Commissioner Ojala stressed that New Zealand and Barbados “have many similarities” and could share experiences to the benefit of both countries.  He said both countries were not major contributors to the global problem, but it had adversely affected them, and there was the need, now more than ever, to prioritize climate change on agendas in talks with larger countries.

They also discussed the Sargassum seaweed and the threat it poses to Barbados’ coral reefs, and by extension our tourism product, as well as the livelihoods of those who depend upon the ocean.

Mr. Prescod mentioned that Barbados was engaged in efforts to discover the usefulness of the Sargassum seaweed, and any technical assistance offered would be greatly appreciated. Mr. Ojala cited a study at one of the country’s universities on the seaweed and said he was willing to share the findings of that study with Barbados.