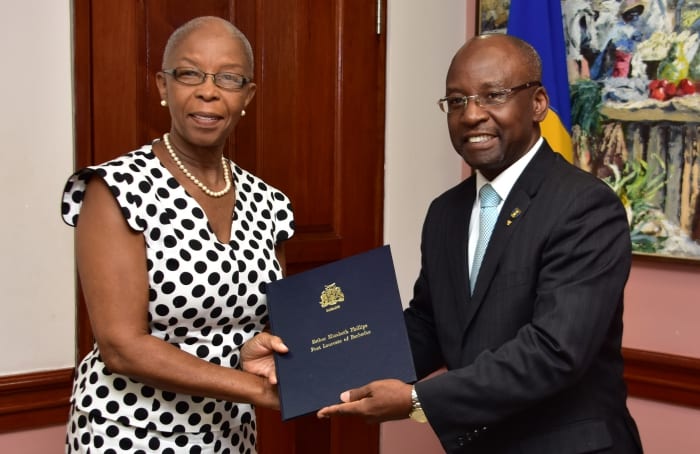 Minister of Culture, Stephen Lashley, presenting Esther Philips with her documents and instruments of appointment as Poet Laureate during a recent meeting in his Ministry’s conference room in Sky Mall. (C.Pitt/BGIS)

Minister of Culture, Stephen Lashley presented Ms. Philips with her documents and instruments of appointment during a meeting on Wednesday in his Ministry’s conference room in Sky Mall.

The designation Poet Laureate is conferred on a literary scholar actively involved in poetry and the literary community of their country for not less than three years.

According to the Minister, the decision to bestow Ms. Philips with the title of Poet Laureate was made by Cabinet in February, and it was well received by members of the literary community. “We expect that this will place Barbados at the focal point of continued interest, both regionally and globally,” he stated.

Mr.  Lashley praised the country’s new Poet Laureate for her years of outstanding contribution to the literary field and noted that she had made “an indelible footprint” in the literary arts in Barbados.

“We believe that she will be an eloquent advocate for Barbados…we have been in need of such an advocate and I think that this would help to significantly boost interest in the literary arts,” he indicated.

While noting that it was “a very fitting honour”, the Minister spoke on the importance of having a focal point for the literary arts in Barbados, as “no country can develop socially, economically or politically without a very firm focus on literature and development”.

Ms. Philips, who has written several works of prose and poetry including Leaving Atlantis, When Ground Doves Fly and The Stone Gatherer, expressed her delight in assuming the role of literary ambassador. She stated that she did not take the conferment lightly but was enthusiastic about reaching out to various groups in Barbados to discover and highlight the poetic pieces that exist.

She expressed the hope that her position as Poet Laureate would bring more consciousness to Barbadian writing. Ms. Philips also acknowledge the influence of writing stalwart, Kamau Brathwaite, to the literary landscape of Barbados.

During her appointment Ms. Philips is required to produce at least one original work each year; reflect the life of Barbados through reading of poetry; incorporate poetry into a range of official and informal activities; appear and present work of significance to the citizens of Barbados, and raise an appreciation for poetic forms of writing through a series of programs and workshops.

The appointment is for a period of three years with the possibility of renewal upon completion.