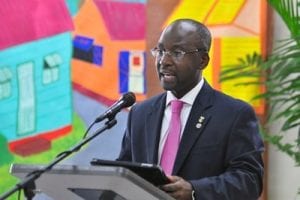 Research into family history can challenge and change the narrative which typifies the Barbadian man and woman as only having a history of oppression and misfortune.

This sentiment was expressed on Tuesday by Minister of Culture, Sports and Youth, Stephen Lashley, at the launch of the Barbados Museum and Historical Society’s Barbados Family History Project, at the Museum, Garrison St. Michael.

According to Mr. Lashley, the project, which is aimed at encouraging Barbadians to research and document their family history, can offer “a positive, fresh, new perspective” on the nation’s heritage, people and families.

“Caribbean people have always been in search of identity. The story of who we are as a people in terms of our ancestry has often been told by others from as early as the emancipation period, well into the post-emancipation period when British anthropologists sought to define and characterise the Caribbean man and woman as primitive and demonise our family structures as dysfunctional,” the Minister explained.

He added that the Barbados Family History Project could lead to the discovery of “family heroes and heroines who achieved success in spite of, and despite, great challenges”.

The Culture Minister noted that the project would not only focus on Barbadians on the island, but would also attract the attention of members of the Diaspora, particularly the second and third generations across the globe.

Maintaining that there was a need to include all generations in the research journey, Mr. Jones emphasised that research into one’s family history was not just for the senior members of society but also for the youth.

“Our youth should be central to our discussions on the topic and it is for this reason that my Ministry welcomes and supports initiatives which encourage young persons to explore their heritage. Research into their family history would serve to pique their interest in the lives of their elders and inform them of the courageous nature of their ancestors,” he said.

The Barbados Family History Project is being executed by the Barbados Genealogy Group, a special interest group of the Barbados Museum and Historical Society.