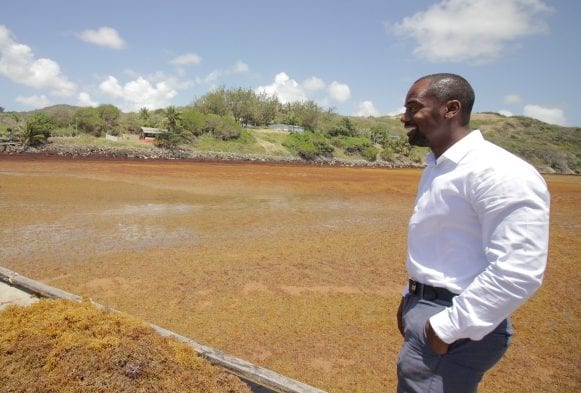 Minister Humphrey noted that Government was still seeking ways to deal with the influx of Sargassum seaweed on the island’s beaches. (FP)

Government has been urged to outline its requests for assistance in dealing with matters within its fisheries sector, including the handling of Sargassum seaweed, and make a formal request to the Food and Agricultural Organization (FAO).

During the visit, Mr. Willoughby outlined a number of plans and projects which Barbados was seeking to undertake, including a Dolphin Skin Project and another involving the development of by-products from fish flesh and bones.  He added that the Ministry was also seeking to place a greater emphasis on training and accreditation for existing and new entrants to the industry going forward, as it sought to improve the quality of the end product.

Mr. Willoughby also noted that the Fisheries Division was working on its regulatory framework through an Inter-American Development Bank Project to examine the issue of Food Safety for Barbados, along with the updating of the Fisheries Act.

Minister Humphrey noted that Government was still seeking ways to deal with the influx of Sargassum seaweed on the island’s beaches, and said a paper was taken to Cabinet to address a number of issues related to it. That, he said, would include where it was coming from, the possibilities of booming it, and possible uses of the algae.

In response, Mrs. Fletcher-Paul indicated that the FAO had a number of programmes and projects which could respond to the requests, and from which there were funds available that could benefit Barbados.

She added that a regional symposium was expected to be held in Barbados in September to examine areas such as research done on the algae, its removal and utilisation.

The FAO Project Coordinator further noted that they would also be assisting countries in accessing the Green Climate Fund.

“There are opportunities to mobilise resources and we are ready to help with the readiness of proposals for the fisheries sector; just write,” she said.

Minister Humphrey gave the assurance that the FAO would receive formal correspondence outlining the Ministry’s requests, as soon as possible.