Farm Labour Programme Holding Its Own 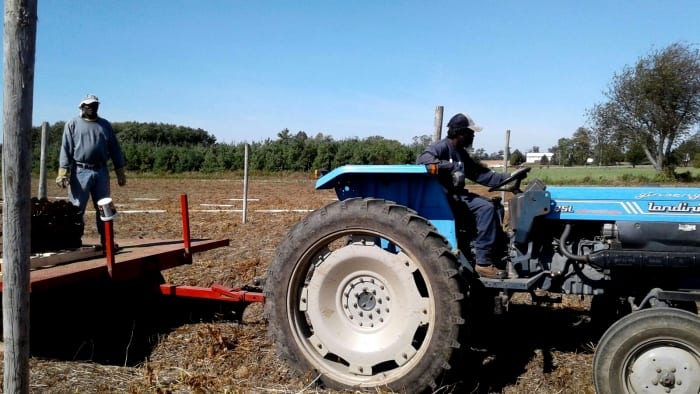 The future viability of the Seasonal Agricultural Workers’ Programme in light of recent changes by the Canadian government will be high on the agenda, when local and regional government officials and Canadian seasonal farm labour employers meet over the next few days.

Tracing the history of the programme, the Minister said Barbados, like many of its Caribbean neighbours, was able to remain in the programme even through the 1970’s when the world experienced the oil crisis.

She noted that despite the negative impact from the crisis, the governments of Canada and the Caribbean, along with the employers, continued to negotiate contracts for workers to enable them to access employment; to support the protection of their wages; and to ensure that acceptable terms and conditions such as housing, medical insurance and benefits for workplace injury were provided.

Senator Byer Suckoo said the programme continued over the years until the Seasonal Agricultural Programme hit “a stumbling block” in the 1990’s when there was a downturn in the global economy and the Caribbean underwent a structural adjustment period.

“Because history repeats itself, we find ourselves in a similar situation today. This has resulted in more stringent measures and conditions being enforced by Canada and other receiving countries participating in temporary foreign worker programmes.  For the sending countries, this has meant a reduction in the number of persons being recruited,” she pointed out.

The Labour Minister continued: “This has proven to be a challenge for Caribbean supply countries and has been aggravated by an upsurge in competition from non-English speaking countries across the globe. Barbados sends fewer workers to Canadian farms and almost none to work in hotels, restaurants and stores under the low-skilled programme which is another employment programme we have with Canada. During the deliberations this week, we will again identify those challenges which are surfacing and which have the potential to impede the effectiveness of this programme and may even threaten its existence.”

Senator Byer Suckoo also disclosed that attention was being paid to enhancing the workers’ technical and vocational skills with support from the CARICOM Heads of Government, and the Caribbean Association of National Training Authorities, which facilitated the introduction of Caribbean Vocational Qualifications and National Vocational Qualifications in a number of areas in the agricultural sector.

She argued that operational sectors and mechanisms in agriculture were more technologically advanced and everything must be done to “equip seasonal workers with the skills to function”.

In addition, the Labour Minister commended the staff of the National Employment Bureau and the Liaison Service in Canada for their hard work, as well as the Canadian farms that continue to hire Barbadian workers.

During the event, a number of workers received long-service awards, ranging from those who joined the programme in 1967, to those who spent 46 years, 40 – 44 years and 31 – 39 years on the programme.