Farm Workers Urged To Give Their Best 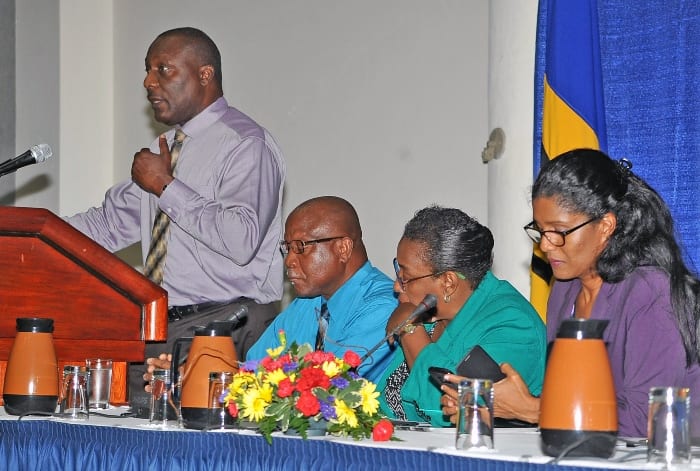 Future opportunities for Barbadians to work on the Canadian Farm Labour programme will depend on those employed there maintaining a high standard of work and conduct.

Minister of Labour, Senator Dr. Esther Byer Suckoo, issued this reminder to a selection of workers recently, during the Local Annual Review Meeting of the Canadian Farm Labour Programme, at the Lloyd Erskine Sandiford Centre.

Following a report by Liaison Officer to Canada, James Inniss, on the output and conduct of participants in the programme, Senator Byer Suckoo commended the labourers, who had been deployed in Canada on a variety of farms.

“Let me take this opportunity to thank you workers…because you are the ones who go up there and get people interested in Barbadians… The [fact] that we have done so well so far is because of you,” she acknowledged.

However, Dr. Byer Suckoo lamented some of the other findings in Mr. Inniss’ report, which revealed that workers were found growing marijuana on their employers’ farms. This, she warned, was a “serious and unacceptable practice”.

“We tell employers [abroad] that before workers get on this programme, they must have a police Certificate of Character, so that we are vouching through the Royal Barbados Police Force that you guys are of fine and upstanding character…

“When we have workers who go to Canada and break the law…then the employers run the risk of having their programmes shut down…and you can understand that they will send you back home as soon as possible,” she stressed.

The Labour Minister pointed out that it is not just the individual worker who would be affected in such instances, but the overall reputation of Barbadians in the programme. According to her, this reputation has been built by the programme’s dedicated participants over the past 49 years, and should not be taken lightly.

She noted that Barbadian workers had an advantage over other migrant labourers because of their ability to speak English and communicate effectively. As such, she advised participants not to squander their opportunities once their “feet were in the door”, but to continue to conduct themselves as ambassadors for the island.