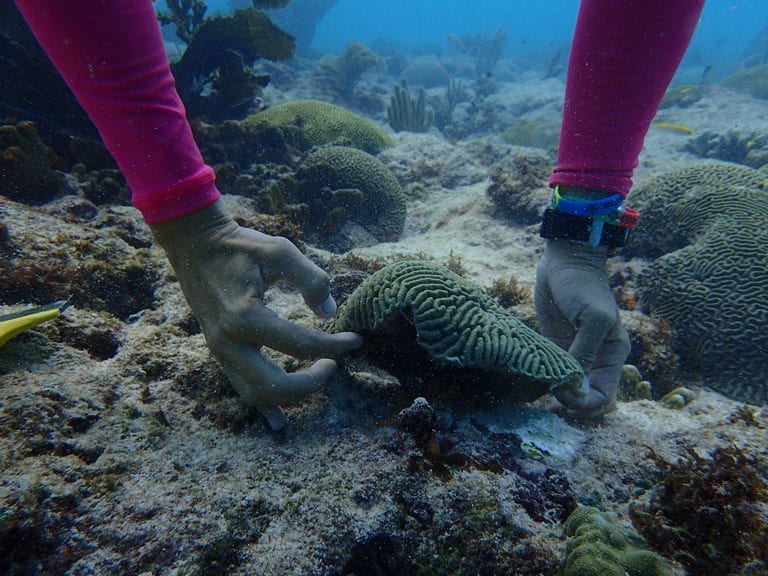 A piece of coral being carefully handled after it was removed from the ocean floor. (Photo Courtesy of the CZMU)

An intensive effort to reinvigorate Barbados’ coral reefs is currently being led by the Coastal Zone Management Unit (CZMU).

It is the Ecosystem-Based Adaptation Pilot Project, which falls under the IDB-funded Coastal Risk Assessment and Management Programme (CRMP), which is designed to investigate the potential to “kick start” the recovery of the island’s coral reefs. The project began in June 2014 and will end in December this year.

During an interview with the Barbados Government Information Service, Coastal Information Systems (CIS) Manager at the CZMU, Ramon Roach, explained this component of the project would involve an examination of where specific healthy coral types were; the water quality challenges at these locations, and the development of a coral nursery through the renovation of an existing laboratory at the Bellairs Research Institute of McGill University.

Explaining that a coral nursery was a way to grow corals via asexual reproduction, Mr. Roach stated that while some species reproduced sexually through the release of sperm and eggs, some corals would begin to grow a new colony if a piece was broken off from the main colony. This process, he said, was referred to as asexual fragmentation. 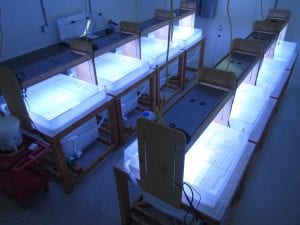 Coral in the lab at the Bellairs Research Institute under controlled conditions. (Photo courtesy of the CZMU)

The CIS Manager said that the project was conceptualised to determine if non-traditional engineering methods could be used to reduce erosion across the island’s beaches.

“This is a pilot project to improve our resistance to natural impacts by reinvigorating our nearshore reefs. If we kick start the recovery of the reef, we could over time reduce erosion on beaches without having to construct as many engineering structures,” he reasoned.

He explained that while breakwaters and other engineering structures such as groynes and revetments were successful, they had a limited design life span compared with corals, which can “self-renew” over long time periods as long as conditions are favourable.

“Breakwaters provide a service and reduce the amount of wave energy reaching the shoreline, and the boulders also recruit the coral and fish. However, healthy coral reefs are still the best environment for reef fish and other organisms to thrive. Furthermore, the sand on most of our beaches is derived from coral reefs, while the breakwaters and other engineering structures primarily trap existing sand,” Mr. Roach outlined.

Under the project, four species of corals will be harvested – staghorn coral; finger coral; mustard hill coral and brain coral – from Barbados’ west and south coasts. The CIS Manager explained these species were chosen because they are among the primary reef-building corals in Barbados and are hardy coral species.

He said the process involved harvesting pieces of coral from the reefs, breaking them into small pieces, attaching them to plates on a frame, and allowing them to grow in tanks in a lab under controlled conditions, before being transferred back to the sea.

Over the course of the project, approximately 1,600 coral fragments about two centimetres in size will be created from coral colonies harvested from donor sites around the island. The matured fragments will be transplanted to the marine environment at year-end and closely monitored by the CZMU going forward.

However, officials at the CZMU are assuring members of the public that their harvesting of the coral from the ocean will not put the already stressed reefs in any further danger given the small volume of material being collected overall (approximately 8m2). 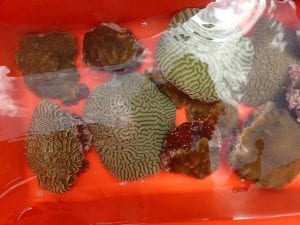 Some of the coral to be placed in the lab. (Photo courtesy of the CZMU)

Acting Water Quality Analyst at the CZMU, Richard Suckoo, explained that the CZMU was doing research to see if the coral reef could be reinvigorated, and the island’s legislation provided leeway for research to be conducted.

He added that though officials at the CZMU were highly trained and specialised in the area, specialists were brought in to help guide the process and design the laboratory.

Mr. Suckoo said the process involved taking up an entire head or colony of coral from the ocean, transporting it to the lab and fragmenting it by sectioning the colony into smaller pieces under sterile conditions. “It is the expectation that every fragment we create will survive,” he said, noting the process was very time sensitive.

The Water Quality Analyst said the nursery at the Bellairs Research Institute provided the best location for the project, as there was a closed room where the lighting and temperature could be controlled, and it was still near to the sea.

“By putting the corals in a lab, we are ensuring that every day is a good day,” he remarked, noting that access to the lab was strictly controlled.

Local staff working with the coral nursery is presently undergoing training in lab operations, which would entail the management of the tanks and filtration system, and ensure that the equipment was working on a daily basis. Training is also being conducted in harvesting and segmentation techniques and how to manage the growth of the corals.

Mr. Suckoo added that the process would be recorded in a manual, which would be used to manage the system going forward. However, he stressed that this delicate process should not be attempted by unauthorised, untrained personnel.

Apart from the potential harm it could cause, damage to corals is illegal under the Coastal Zone Management Act, except where explicitly authorised by the Minister of the Environment for research purposes.

The Water Quality Analyst disclosed that the ongoing project had also highlighted problems in the marine environment related to water quality. He reasoned that if those issues were corrected, the recovery of the island’s coral reefs would be accelerated even further, especially with the nursery programme.