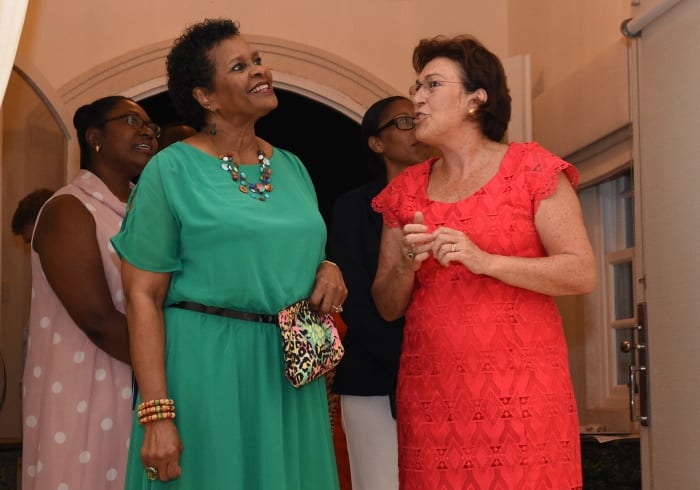 A festive mood was in the air when Government officials, members of the diplomatic corps, representatives of Non-Governmental Organisations and friends gathered to bid farewell to Ambassador of New Zealand to Barbados, Jan Henderson.

During a reception held at her official residence in Sugar Hill, St. James, on Tuesday, Mrs. Henderson remarked: “This posting has been all that and more!”

She described her tour of duty as “four full years of challenge, hard work, occasional frustration, real professional highs and, above all, lots of laughter and fun”.

The New Zealand diplomat noted some of the “fun” projects on which she and her team worked.

“The inaugural Barbados Rugby 7s tournament – with women making up half the teams; TV cooking shows with Chef Peter Edey and the Royal Commonwealth Society; getting drenched in a rain storm while visiting the Nature Fun Ranch… this wonderful NGO that works with youth at risk, and counting endless black belly sheep at Greenland Livestock Research Centre [as] we are partnering with the Ministry of Agriculture and IICA (Inter-American Institute for Cooperation on Agriculture) to renovate the breeding centre,” she recalled.

Conversely, she said it was “heart breaking” to see the devastation caused by Hurricanes Maria and Irma in the Caribbean.

Also assigned to the Eastern Caribbean, Ambassador Henderson noted that New Zealand was helping Dominica to rebuild through geothermal development. She remarked that one small geothermal plant would provide almost half of Dominica’s electricity needs from their own resources of renewable energy. 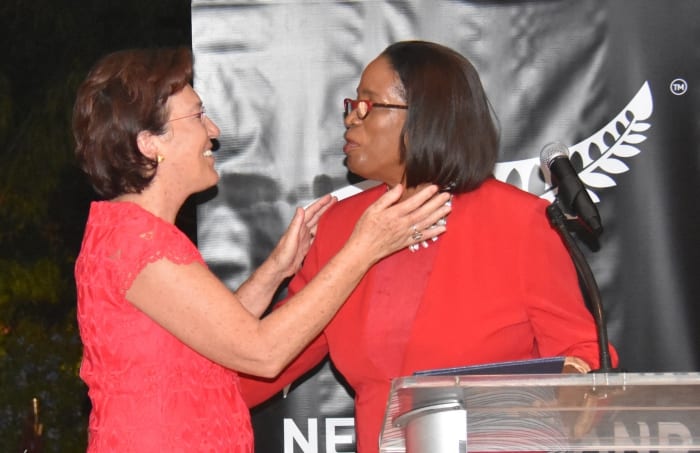 Minister in the Ministry of Foreign Trade, Sandra Husbands, lauded the Ambassador’s achievements and explained that although Barbados and New Zealand established diplomatic relations on July 4, 1974, bilateral relations between the nations remained inactive, yet cordial, until 2013.

“The real turning point in our countries’ relations came with the establishment of a resident New Zealand High Commission in Barbados in March 2014, which was officially opened by you, High Commissioner, in 2015,” she said.

Stating this allowed for the deepening of relations, she pointed to areas of increased cooperation in agriculture through training; career sensitisation to school children; and work with the Greenland Livestock Centre, the Caribbean Agricultural Research and Development Institute and the Ministry of Agriculture.

The Foreign Trade Minister added that cooperation had also started in Oceans and Fisheries as climate change and its impact, over fishing, illegal fishing and Sargassum seaweed were areas of concern for both countries.

Mrs. Husbands further stated that New Zealand had a special understanding of the challenges facing Small Island Developing States given the close relationship they have with the Pacific Islands.

“Barbados and the Caribbean Community therefore consider New Zealand to be a valuable interlocutor on issues affecting small states,” she remarked, adding she believed Barbados and New Zealand were on the path towards deeper engagement.