Fight To End AIDS Epidemic By 2030 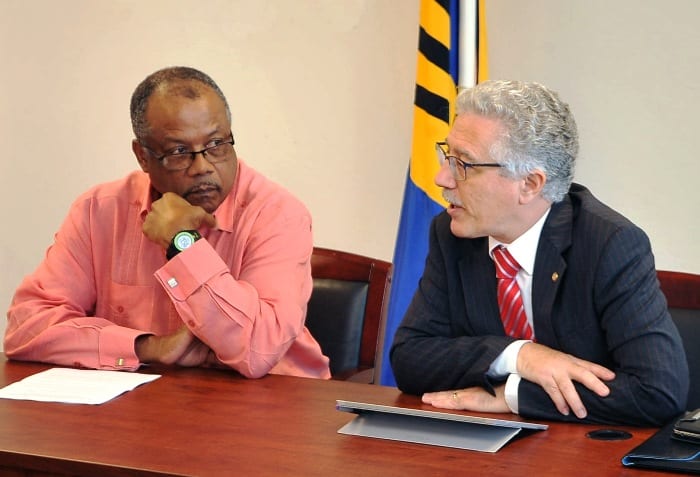 PAHO/WHO Representative for Barbados and the Eastern Caribbean, Dr. Godfrey Xuereb speaking to the media while Minister of Health, John Boyce looks on. (A.Miller/BGIS)

Almost half of all people living with HIV in Latin America and the Caribbean are still untreated, and one in three do not know they are HIV-positive.

These are two of the challenges faced by the region as it moves towards the global objective of ending the AIDS epidemic as a public health threat by 2030.

Speaking at the launch of the HIV “Treat All” Initiative in Barbados, Representative of the Pan American Health Organisation/World Health Organisation (PAHO/WHO) for Barbados and the Eastern Caribbean, Dr. Godfrey Xuereb, noted that expanding access to treatment was at the heart of the new treatment targets for 2020.

The PAHO/WHO Representative congratulated the Ministry of Health on this “bold move” to embark on the treat all initiative which, he said, would not only be beneficial to those living in Barbados but should also be a “beacon” to all the Caribbean.

“Offering antiretroviral therapy as soon as HIV is diagnosed can keep people alive and healthy and reduce transmission. To those who are taking medication, the key message is ‘Never stop taking your medication’…HIV treatment can be as simple as taking a single pill per day,” he advised.

According to Dr. Xuereb, the Latin America and Caribbean region has come a long way in spearheading the global response to HIV and has achieved substantial results.

He outlined some of these as AIDS-related deaths being reduced by 25 per cent since 2000, from 66,000 deaths to 49,500 in 2015; and the expansion of prevention of mother-to-child transmission programmes, averting an estimated 28,000 new infections in children since 2010.

The PAHO/WHO Representative said that if universal health coverage was to be achieved, it would be necessary to ensure that ART and broader HIV services reached those in greatest need and was sustainable in the long term.