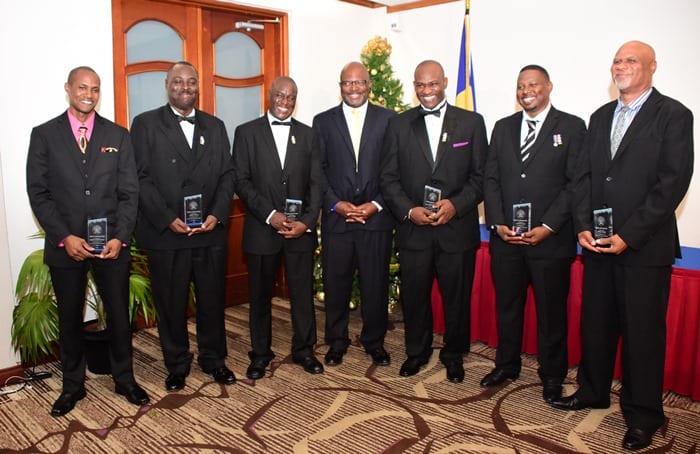 Attorney General and Minister of Home Affairs, Adriel Brathwaite (centre), poses with the six fire officers who received the Humanitarian Award at the Barbados Fire Service’s Awards Ceremony at the Accra Beach Resort and Spa on Thursday. (C.Pitt/BGIS)

The Barbados Fire Service (BFS) is embarking on a new era in which excellence and professionalism are the buzz words. And, Chief Fire Officer, Errol Maynard, has warned that the BFS will not be accepting or rewarding mediocrity.

He made this declaration as he addressed an awards ceremony for outstanding Fire Officers at the Accra Beach Resort and Spa on Thursday night.

“We want you to walk the road to success; we want you to ride the waves to professionalism; and we want you to help drive the bus of excellence. We want every member of the Barbados Fire Service on board,” Mr. Maynard stated.

He noted that the award ceremony was a way of acknowledging and awarding officers for their hard work and dedication to a profession when no one stopped to stay “thank you”.

“Tonight we acknowledge your contribution to the people of Barbados in a special way. We want you to know that we care and appreciate the work that you do…. This evening we invited you to say a special ‘thank you’,” Mr. Maynard said.

However, he warned the awardees that the acknowledgment was not to say that they had arrived or had made it, but should be seen as encouragement and an opportunity to continue along a positive professional career path that led to excellence.

Among the top awardees were the six firemen – Gordon Boxill, Marlon Small, Carlos Bishop, Christopher Corbin, Fernando McAllister and Kelan McAlla – who journeyed to Dominica to aid in the rescue mission following the passage of Tropical Storm Erika last year. They each received the Humanitarian Award.

Meanwhile, Fire Prevention Officer, Natasha Forde, received a fitting birthday gift when she was named Fire Officer of the Year. She also received a Dedication to Service award.

Eight Fire Officers received Dedication Awards, while the Barbados Postal Service and Network Services, who work closely with the BFS, each received an Appreciation Award.