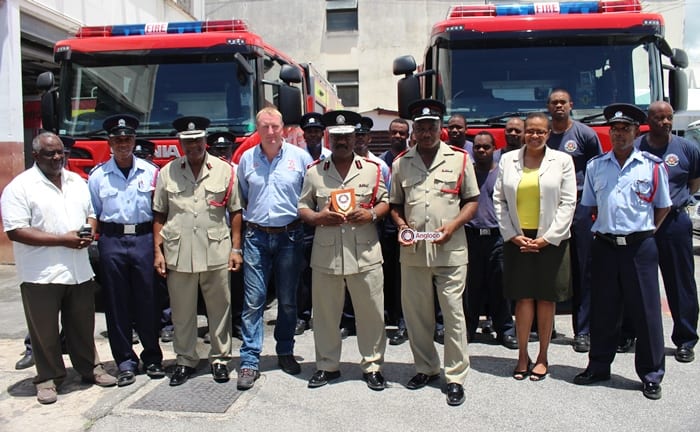 The Barbados Fire Service is now in a better position to respond to emergencies along the island’s south coast, stretching from Hastings, Christ Church to Spring Garden.

One truck is a multimedia vehicle and carries 3, 000 litres of foam and 2,000 litres of water. It also contains a dry powder to fight chemical fires.

The second vehicle is a water/foam tender and carries 2, 700 litres of water and 4, 500 litres of foam. Both vehicles are equipped with rescue tools.

“The multimedia vehicle is specifically designed to take care of any incident we may have in The City area, especially in the corridor of the lower part of Hastings down to Spring Garden, where we have a number of special risk installations like the [Barbados] Light and Power [company], Shell and [Mount Gay]. This vehicle is equipped to deal with almost any incident that we may have in that area,” Mr. Maynard said.

He explained the multimedia vehicle would be stationed at the Bridgetown Fire Station, while the water tender would be located at the Arch Hall Fire Station.

Mr. Maynard noted that the BFS also received a dinghy to facilitate water rescues, and a command vehicle fully equipped to respond to hazmat incidents. The latter, he said, also contains a restroom for fire officers and the internet.

Speaking during the brief handover yesterday, Mr. Maynard said the fire officers were trained in how to use all of the new equipment in keeping with the policy of the BFS. “Approximately 40 officers were trained over the last two days. We have a training staff who would train the other officers over the next week,” he said.

Meanwhile, Service Supervisor with Angloco, the company which built the fire trucks, Dave Stone, thanked the BFS for working with the company over the last 25 years, and noted another truck was also in the pipeline.