Firefighters Up For The Challenge 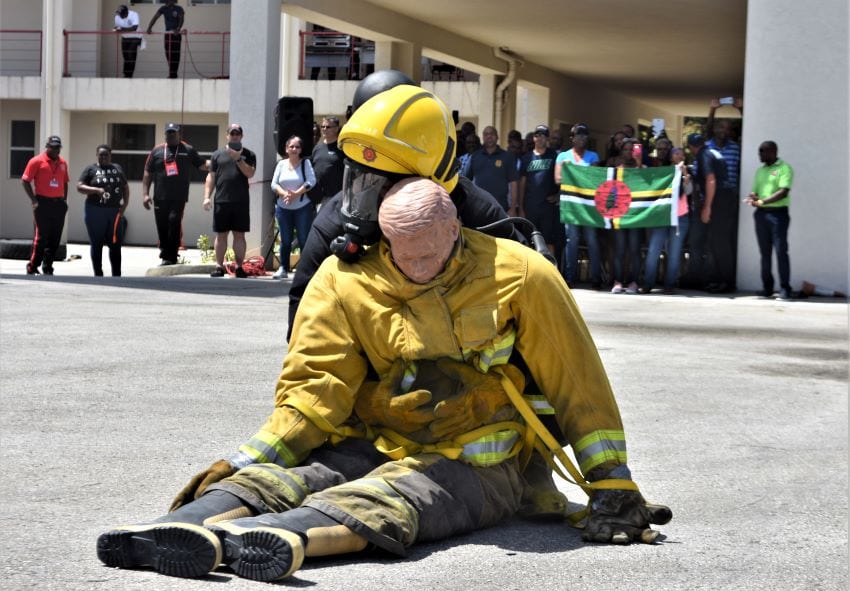 This officer from the Dominica Fire Service taking part in a “rescue operation”, which was part of the Firefighters’ Challenge. (A.Husbands/BGIS)

It was the battle of the fittest at the Arch Hall Fire Station today as local and regional firefighters competed for the title of Champion in the Firefighters Challenge.

The challenge formed part of the activities held during the Caribbean Association of Fire Chiefs’ conference, and was opened to the public.

Speaking during the event, President of the CAFC, Errol Maynard, explained that the challenge was about technique, endurance and the officers’ ability to compete against each other to see who could go through an obstacle course the fastest, or in the least amount of time.

He explained that the challenge involved the competitors getting dressed, carrying a line of hose to a height to symbolize a high rise fire, raising a hose, and beating a truck tire using a sledge hammer over a line.

“The tire symbolizes forced entry.   Sometimes, we have to knock down doors or breach concrete.  It takes the energy out of the guys,” Mr. Maynard pointed out.

The CAFC President added that the other part of the challenge involved firemen ringing a bell at a distance so that they could find the target.

“If you are going to out a fire, you have to be able to find the target, that shows your ability to control the branch (hose) and the ability to direct the water,” he noted. 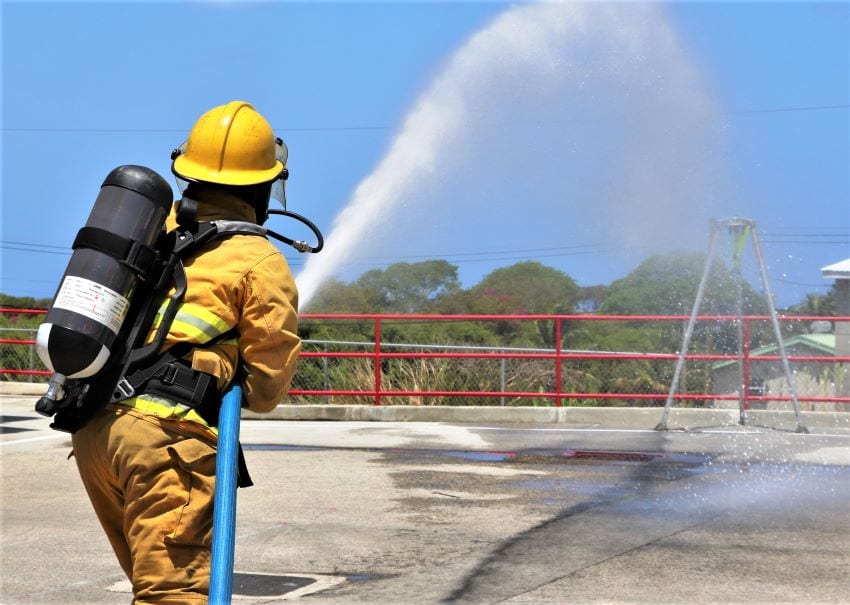 This firefighter moved on to the next round of the challenge after hitting the bell with water from his hose. (S.Medford/BGIS)

From there, competitors had to simulate dragging a victim portrayed through “Rescue Randy”, who weighed approximately 168 pounds, which is the average weight of a fireman, away from the danger area to safety. “It is not an easy thing.  It takes a lot out of you.  A firefighter has to be fit and have an endurance level,” he stated.

The day’s activities also featured an emergency medical service challenge which saw paramedics from the Barbados Ambulance Service competing with those from Antigua and Guyana on how to stabilize a victim.

Given the scenario of shots fired in Nelson Street, and “a man down”, the paramedics were pressed into action to demonstrate how they would stabilize and treat their victims within 10 minutes.

During an interview today, Mr. Maynard said Barbados appeared to be leading in the competition for the coveted title of Champion, which was up for grabs.  The competitors will have to wait for tomorrow night’s dinner and awards ceremony before the results of today’s challenge are known.