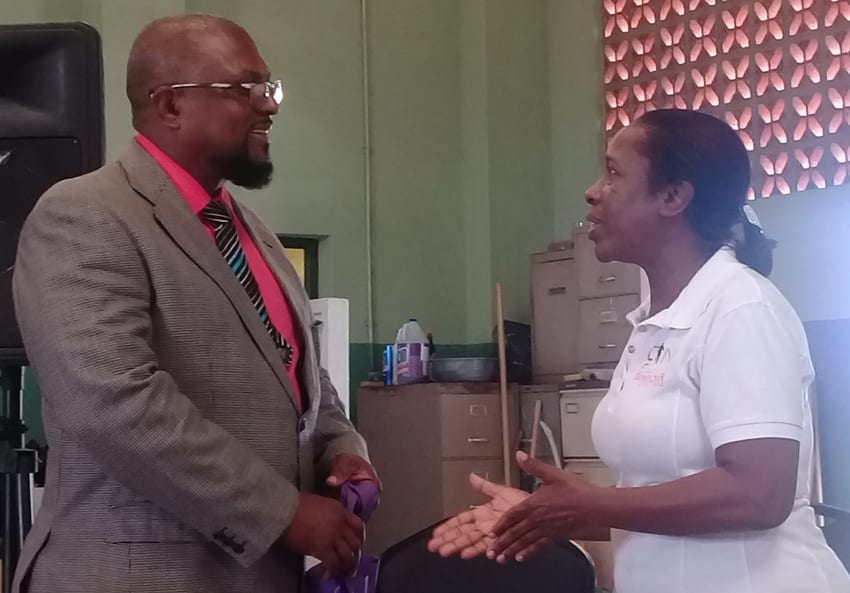 Minister of Agriculture and Food Security, Indar Weir chatting with Director of the Caribbean Institute of Nutrition and Dietetics, Esther Selman, at the culmination of the third annual Caribbean Nutrition Conference at Graeme Hall, Christ Church. (N.Phillips/BGIS)

Amid growing concerns about the consumption of unhealthy foods and non-communicable diseases (NCDs), Minister of Agriculture and Food Security, Indar Weir, has signalled his intention to “intensify efforts to strengthen the linkages between agriculture and health and wellness”.

Addressing the culmination of the third annual Caribbean Nutrition Conference, recently held at his Ministry, at Graeme Hall, Christ Church, Minister Weir said he endorsed the thrust to encourage Barbadians to grow their own food.

He noted that this effort focused on providing householders with fresh fruits and vegetables devoid of excessive amounts of pesticides and chemical fertilisers, and allowed them to be physically active, an important element of maintaining good health.

Mr. Weir, however, expressed concern about the unavailability of locally grown produce to meet the demand, as well as the pricing of these commodities. The Minister said the aforementioned issues were compounded by idle arable lands, which he said must be returned to production, if citizens were to be supplied with healthy foods at affordable prices.

While vowing that steps would be taken to address this, Mr. Weir stated: “It is therefore the intention of the Government to put measures in place that will encourage the return of these lands to production, and discourage the tendency to leave lands idle for protracted periods and then endeavor to have the usage changed from agriculture to other areas of activity.”

Mr. Weir added that Government was seeking to provide incentives to farmers to assist with their operations and reduce prices to consumers.

The Agriculture Minister also pointed to the diversification of the sector through the cultivation of non-traditional crops.  He stated that while traditional agricultural crops would be promoted, it was the intention of Government “to pursue efforts in the area of medical marijuana”.

Mr. Weir added: “To this end, the Ministry of Agriculture and Food Security will soon be embarking on, and putting in place the requisite mechanisms to realise this objective.”