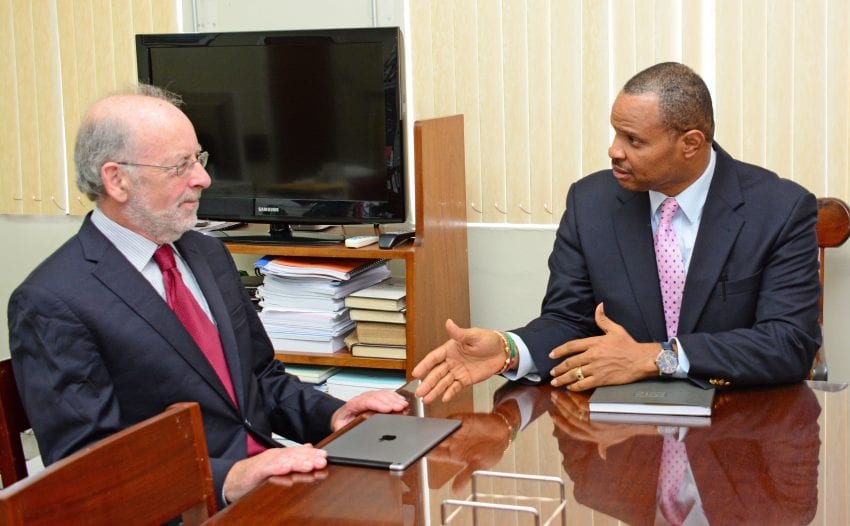 Foreign investors are still expressing an interest in Barbados, despite its challenging economic situation.

Minister of Finance, Christopher Sinckler, made this disclosure recently when Distinguished Visiting Fellow and former Governor of the Central Bank of Ireland, Dr. Patrick Honohan, paid him a courtesy call at Government Headquarters.

Mr. Sinckler said he was pleased investors were expressing confidence in the island, and gave the assurance that Government was working assiduously to deal with the current financial challenges.

The Minister told Dr. Honohan that officials here had paid close attention during Ireland’s financial crisis a few years ago and noted that such challenges were never easy to deal with.

Dr. Honohan shared Ireland’s experience with Minister Sinckler, including going to the International Monetary Fund (IMF). He stressed that any country engaging the IMF should develop its own plan to take to the institution, and insisted that it should have national buy-in.

The former Governor, who assisted in steering Ireland out of its worst financial crisis, is also an Honorary Professor of Economics at Trinity College in Dublin, and a Non-Senior Fellow of the Peterson Institute for International Economics.

He has published numerous books, academic journals and papers in a range of internationally recognised business publications, such as Finance for Growth; Policy Choices in a Volatile World; and What else can Central Banks do? He was the Visiting Scholar to the International Monetary Fund and the Australian National University.

While in Barbados, Dr. Honohan has been meeting with various industry leaders and government officials. He will participate in the Regional Economic Forum, which will be broadcast live across the region on Thursday, March 30.