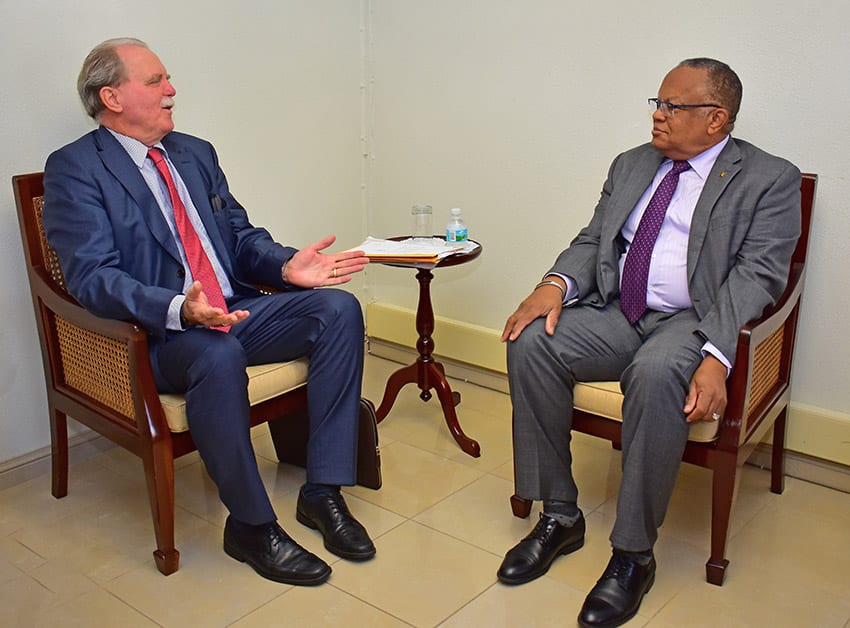 Minister of Foreign Affairs and Foreign Trade, Senator Dr. Jerome Walcott, has called on Germany to encourage greater communication between the European Union (EU) and CARICOM on the issue of blacklisting member states as tax havens.

Minister Walcott’s appeal came during a farewell courtesy call by Ambassador of the Federal Republic of Germany to Barbados, Holger Michael, recently.

Stating that it appears that the goal post keeps changing for developing countries, which face hurricanes and economic recessions, he explained: “Barbados passed 15 pieces of legislation, and in two months the OECD said we complied, but then the EU said we didn’t, while some EU countries are in breach themselves.

“Germany has tremendous influence in the EU; we encourage you to talk to us and let us talk to you.  Look at levels of development, so somewhere along the lines, there can be a softening of positions.  This can be discussed at political levels, not only at the technocrats’ level.”

He praised Germany and its engagement with this island. “Barbados and Germany have enjoyed a good relationship for 52 years, and we want to strengthen it.  Barbados is a firm believer in multilateralism; your views are not dissimilar from ours in most respects.

“We have commonalities in democracy and human rights.  You support small island developing states in the fight against climate change, and provide technical assistance to CARICOM’s mitigation process.  We also admire your strides in renewable energy,” Minister Walcott said.

The outgoing Ambassador noted that Germany regards this region as important. “We have many commonalities.  The world is changing…there is global warming and terrorism, and these show that medium and small countries need to join closer to have greater influence on the global scale.  Germany is an ally in the fight against climate change.”

Mr. Holger added that he was pleased Barbados would be participating in the upcoming Latin American and Caribbean Conference in Berlin, and shared that the conference will have an exclusive breakout session for CARICOM member states.  Topics to be discussed include digitalization, free trade, the role of women, and climate change.

He said Germany was interested in securing partnerships with like-minded countries, and underscored that his country also values multilateralism.