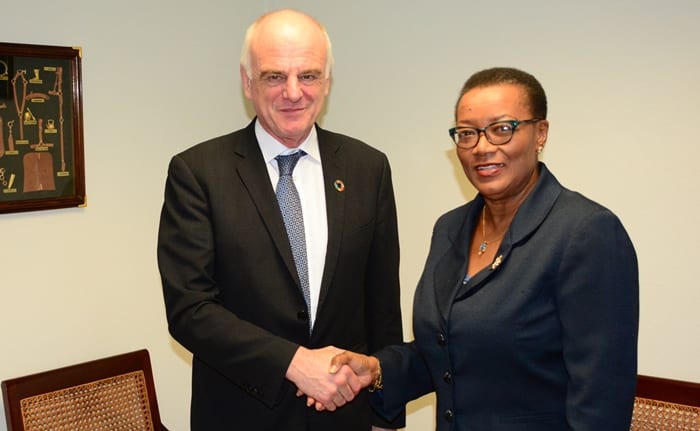 Minister of Foreign Affairs and Foreign Trade, Senator Maxine McClean greets the UK’s candidate for Director-General of the World Health Organization, Dr. David Nabarro at their meeting at the Ministry of Foreign Affairs. (C.Pitt/BGIS)

During their brief meeting, Senator McClean disclosed that health accounted for “a significant percentage” of Barbados’ budget. She added that 60 per cent was spent on combating Non-Communicable Diseases (NCDs), which she described as a “growing global problem”.

Dr. Nabarro reiterated the Minister’s concerns, and agreed that the subject of NCDs was one which any World Health Organization Chief “must take very seriously”.

The Minister of Foreign Affairs shared her belief that “preventive strategies” were necessary to tackle the problem, which not only affected the populace’s general health, but could also impact their productivity in the workplace.

In addition to tackling NCDs, Dr. Nabarro said another area of focus for him would be to shift the attention of the WHO from being placed solely on big countries with large populations to “the world as a whole”.

The officials also discussed climate change from a health perspective, and the challenges faced by vulnerable states.