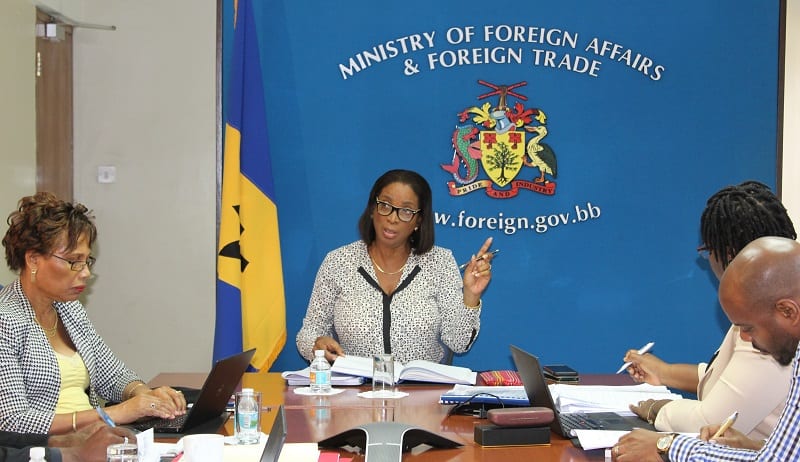 Minister in the Ministry of Foreign Trade, Sandra Husbands, met with representatives of the private sector to discuss the outcome of 47th COTED Meeting held in November in Guyana. (A. Husbands/BGIS)

Barbados is pushing ahead in its quest to expand trade to create economic growth by hosting consultations with representatives of the island’s private sector.

The Foreign Trade Division of the Ministry of Foreign Affairs and Foreign Trade has been hosting these meetings with the aim of sensitizing stakeholders about decisions taken by CARICOM Governments at the 47th COTED Meeting, held in November in Guyana.

Minister in the Ministry of Foreign Trade, Sandra Husbands, explained the rationale: “At the end of the day, business and trade happen via enterprises, and therefore, they have to be actively engaged in any discussions or dialogues which we have [about trade].”

Speaking to the Barbados Government Information Service during an interview following one of the consultations on Monday, she said they looked at the island’s trade policy and how to reposition it so Barbados could actually grow. She added that they also discussed potential opportunities as well as the anticipated impact that COTED outcomes could have on local businesses.

Of primary interest was the CARICOM Interactive Marketplace & Suspension Procedure (CIMSuPro) portal. The online system, which should ideally be ready within a year, is a managed marketplace for CARICOM companies to post their raw materials, goods and services to share with potential purchasers.

The Minister outlined that in the case of the CSME, CIMSuPro would allow for the immediate matching of purchasers with suppliers, bypassing the suspension procedure.

“This is important to help protect us in relation to suspensions. Because a country may apply for suspensions on a particular product that someone here in Barbados is making.  Once we keep checking and putting the fact that we can provide [that item] on CIMSuPro, we can say no, Barbados can supply,” she said.

Minister Husbands also disclosed that her Ministry has been tasked with forming two new groups to help deepen Government’s consultation with the private sector. They are the Inter-Ministerial Consultative Committee (IMCC) and the Business and Labour Advisory Committee (BLAC).

“There will be an IMCC where Ministry officials will together work through the plans that have to be put in place and look at implementation, so that we are compliant with CSME,” the Minister said, adding that the BLAC will comprise representatives from civil society.

She added that the committees were necessary “so that we keep Barbados abreast of what is happening so that Barbados can expand and grow.”