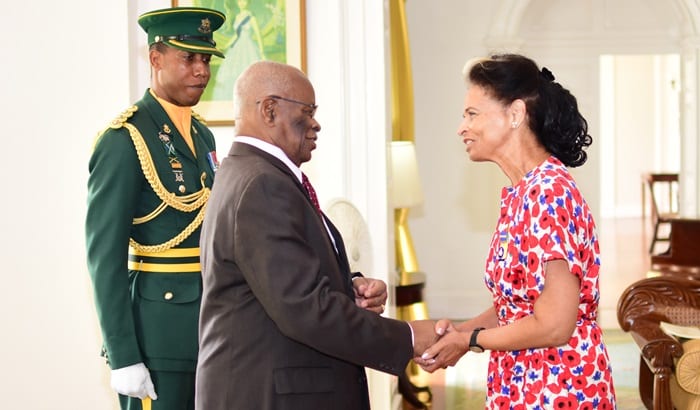 Governor-General Sir Elliott Belgrave congratulating Rosemary Betty Hope-Gittens after presenting her with the Silver Crown of Merit for her contribution to the promotion of Barbados in Canada. (C.Pitt/BGIS)

Three outstanding Barbadians were today presented belatedly with their Insignia of the National Honours and Awards and the Barbados Jubilee Honour 2016, while one received the Governor-General’s Award.

During a brief ceremony at Government House, Governor-General Sir Elliott Belgrave presented Rosemary Betty Hope-Gittens with the Silver Crown of Merit, awarded her in 2014, for her contribution to the promotion of Barbados in Canada.

Former Principal of the Barbados Workers’ Union Labour College, Ulric Sealy, who was recognised in 2016 for his contribution to the trade union movement, was also presented with a Silver Crown of Merit.

Retired Chartered Accountant Kenneth Hewitt received the Barbados Jubilee Honour he was awarded in 2016, in recognition of his contribution to business in Barbados.

In addition, Sir Elliott presented Commander Errington Shurland, who recently retired after a 33-year career with the Barbados Defence Force (BDF), three as Deputy Chief of Staff, with a Silver Medal of Honour.