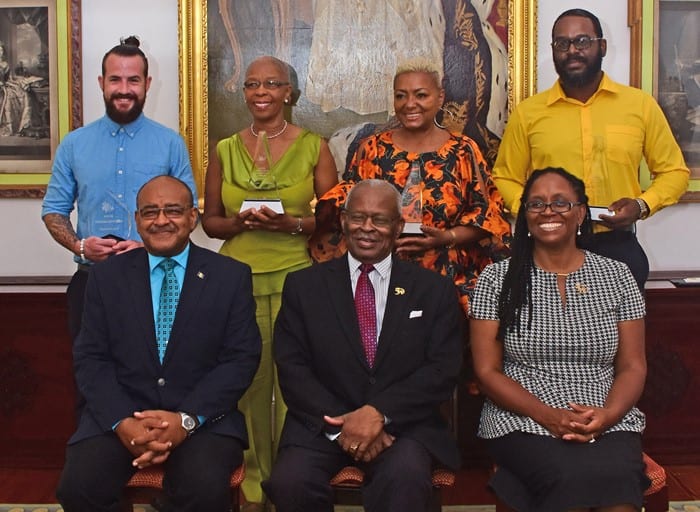 Four talented Barbadians were today presented with the coveted 2016 NIFCA Governor General’s Award for Excellence for their works in the culinary, literary, theatre and visual arts.

Chef Damien Leach, who won the title of Caribbean Chef of the Year at the 2016 Taste of the Caribbean competition in June, was awarded for his “Bajan Marinated Pork Loin and Charred Striploin with smoked plantain and shrimp croquette, ginger and scotch bonnet conkie puree, pickled beets, and torched cucumber”.

Ms. Phillips, a first-timer in the NIFCA competition, expressed pleasure at having copped the top award. “In 2001, I received the Frank Collymore Award but I always left the NIFCA awards for the younger people, and I never considered the professional category at all.

“As it was the 50th Anniversary of Independence and since the central character in Leaving Atlantis is George Lamming, a Barbadian icon, I figured it was a good idea to enter the book in the professional category, and it won the gold as well as the Governor General’s Award, so it was worth the effort to do it,” she stated.

Actress Yolanda Holder, was equally elated. “I’ve been in theatre for the better part of my life and [it’s] not that getting accolades is the highest award, because pleasing my audience is definitely the biggest thing, but to be recognised is definitely a plus,” she remarked.

The Gov­er­nor General’s Award of Excellence is given to professionals entering the various disciplines. Along with a trophy, each winner received a cash prize of $7,500.