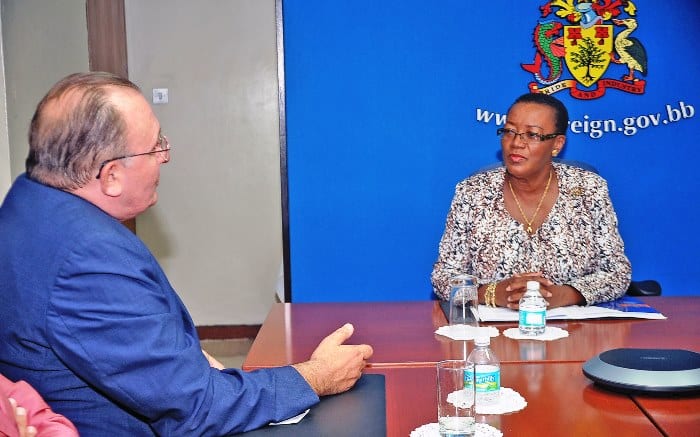 French Ambassador Eric de la Moussaye bid Barbados “adieu” earlier this week and was the beneficiary of much praise on behalf of his country.

This came during his farewell call on Minister of Foreign Affairs and Foreign Trade, Senator Maxine McClean, at her Culloden Road, St. Michael office.

In commending Mr. de la Moussaye on his stint that commenced in September 2015, the Foreign Affairs Minister, said: “It was a very short involvement but I am sure your successor will continue… We also believe that as we engage in cooperation with France, we also look to work with Martinique and Guadeloupe in particular. I think as partners there are opportunities for us to collaborate in the same kinds of areas, whether it is cultural services or education.”

Reminding the ambassador that his country had been very cooperative when Barbados was negotiating maritime issues in the international arena, Senator McClean heaped praise on France for its Alliance Francaise programme, which continues to aid Barbadians with learning French, and for its student involvement in similar programmes at the University of the West Indies, Cave Hill Campus and the Barbados Community College.

Describing his stint as rewarding, the outgoing Ambassador assured the Minister that bilateral relations between the two nations would continue with his successor.

The two officials also discussed other areas for collaboration, including climate change, the Economic Partnership Agreement and joint project involvement based on the European Development Fund.