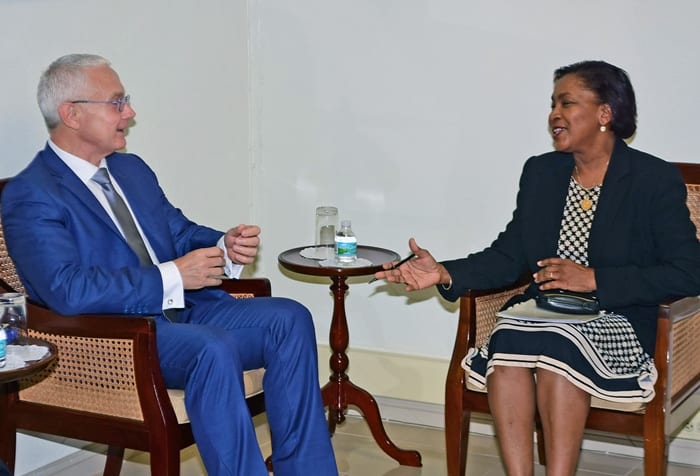 France’s Ambassador to Barbados, Philippe Ardanaz, in discussion with Permanent Secretary in the Ministry of Foreign Affairs, Cecile Humphrey, during a recent courtesy call. (A.Miller/BGIS)

Safety and security within the region was one of the main discussion points when France’s new Ambassador to Barbados, Philippe Ardanaz, met recently with officials of the Ministry of Foreign Affairs and Foreign Trade.

Permanent Secretary in the Ministry, Cecile Humphrey, noted that regional countries which promote tourism and encourage persons to visit their islands must “work around the clock” to ensure their environment was safe and secure.

She also discussed with Ambassador Ardanaz ways of further strengthening the relationship between Barbados and France, and also mentioned bolstering ties with neighbouring countries in the region, making special reference to Martinique and Guadeloupe.

The officials also discussed the importance of citizens of both countries learning a second language, and indicated an interest in revisiting the language assistance programme, which once permitted an exchange of students between Barbados and France in hopes of actively learning and using a second language.