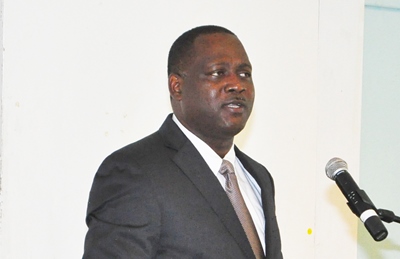 “Not under my watch!”

Those are the words of Industry Minister, Donville Inniss, who has responded to those who have publicly and privately called for the Fair Trading Commission (FTC) to comment on several existing or proposed transactions in Barbados in both the public and private sectors.

Speaking this morning at the opening of a one-day training workshop on Competition Law and Policy, at the Savannah Hotel, Hastings, Christ Church, Mr. Inniss who has responsibility for that office told attendees that as an independent and professional entity, the FTC ought not to and will not engage in discussions outside of their internal system on matters that were not fully and properly before them or on matters on which they were engaged, until at such time that their decisions were made.

He said: “Institutions, companies and individuals are encouraged to raise their concerns with the FTC at any time, and you will be given a response. But do not expect the FTC under my watch, to become a soap opera or to be engaged as a circus where you go see the clowns at play.”

Explaining that the FTC, like the Office of Public Counsel and the Department of Commerce had serious work to do, the Commerce Minister stressed that the work must be done impartially.

“Likewise, those who may not be pleased with proposed mergers or acquisitions will not attempt to use any of the departments in my Ministry to frustrate or disrupt such. But you can expect such bodies to do what the law allows them to do,” the Minister underscored.

Stating that he envisaged that the workshop would contribute to raising awareness and knowledge of competition policy, the Minister noted that it was also intended to strengthen the skills of officials in established competition authorities as well as other practitioners in Government agencies.

“As Barbados moves towards 50 years of independence, there must be the desire for Barbadian firms to be successful globally. Therefore, preserving domestic competition is important for promoting our global competitiveness. That is why I subscribe to the view that constant calls for the Government to ban the importation of items or to impose very high levels of taxation, have never and will never bring about the level of competition or innovation that is needed to drive our economy forward.

“I am ever mindful of issues surrounding employment levels and cultural identity along with other socio-economic matters, but let us not dwell in the past but rather focus on the future. A future where Barbados is a very dynamic, innovative, highly competitive economy, allowing our people to feel and experience genuine prosperity in a safe environment,” he surmised.