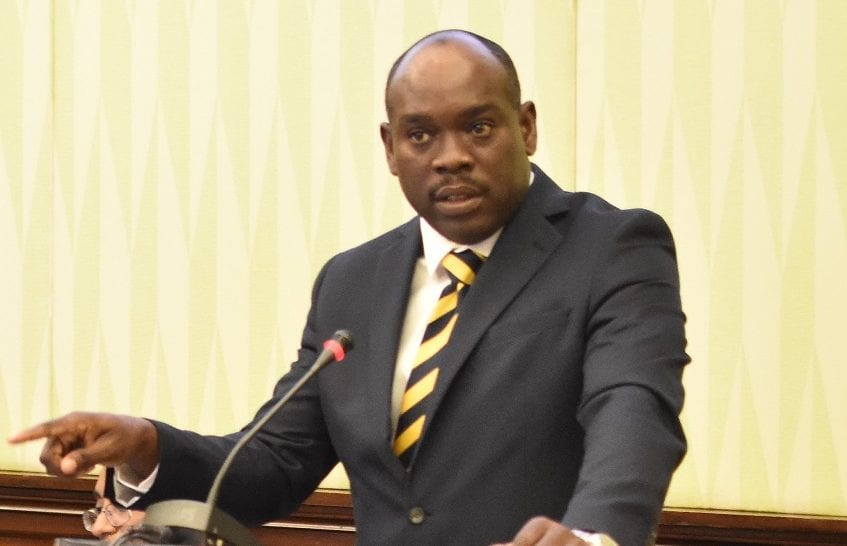 Minister in the Ministry of Economic Affairs, Ryan Straughn, speaking  at the 50th Annual Monetary Studies Conference at the Hilton Barbados Resort. (C.Pitt/BGIS)

Minister in the Ministry of Economic Affairs, Ryan Straughn, has expressed confidence in the economists in this region, saying they have the capacity to solve problems.

Mr. Straughn expressed this view today as he delivered the feature address at the 50th Annual Monetary Studies Conference, at Hilton Barbados Resort, which is being hosted by the Central Bank of Barbados and the Caribbean Economic Research Team.

“Therefore, we must commit to solving that problem, but in a way that allows the academic research, as presented here, to find its way into boardrooms…such that we can turn the skill and the expertise…here in this room, into actionable decisions and proper decision-making by the business communities across the region.”

According to Mr. Straughn, opportunities must be leveraged going forward and he suggested that it was necessary to create a Caribbean economy that was not just fit for purpose but would compete globally in any endeavour.

Mr. Straughn said that as policymakers, they must challenge researchers across the region to go beyond what they had already done and seek out opportunities and solve the problems that exist in the region.

He suggested this must be done in a manner that would be strategic and allowed young economists to “come to conferences like these and present ideas that are disruptive because it is that positive disruption that is going to create the opportunities for those of us in the region”.

“We must engage the various private sector agents so we can close the gap between what is deemed to be exercises in academia so that people actually understand the worth of proper economic research, the value of it and why it is important to be competitive in the 21st century,” he explained.

The Minister stressed that how the private sector was engaged would be critical in allowing the economies to build a level of resilience, while being supported by sound public and monetary policies from the various Central Banks, so the lives of the average citizen could be improved.

The three-day conference, which ends on Thursday, has as its theme: Emerging Economic and Financial Issues in the 21st Century Caribbean Economies.