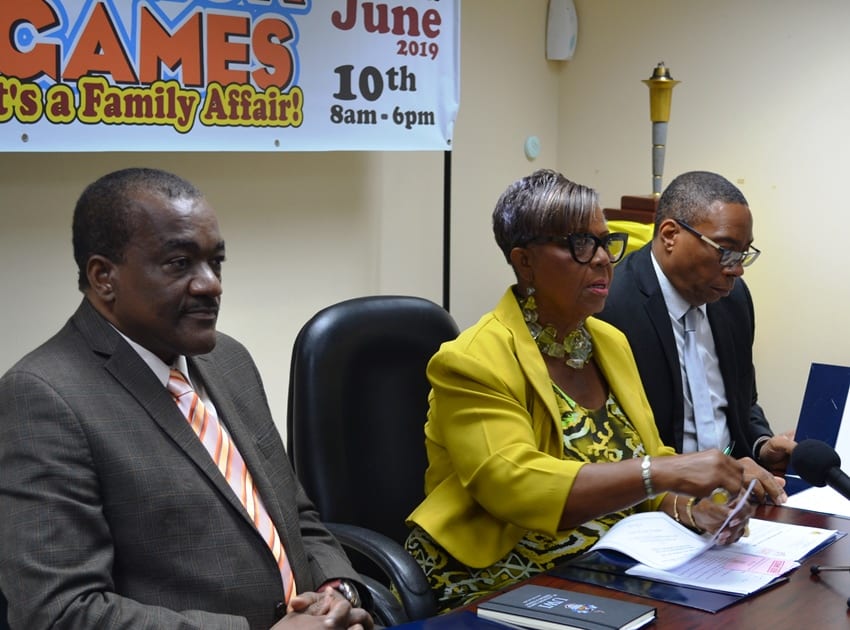 Minister of People Empowerment and Elder Affairs, Cynthia Forde, speaking about the fun activities at the upcoming National Senior Games. She is flanked by Minister of Health, Lt. Col. Jeffrey Bostic (left) and Minister of Sports, John King. (S.Medford/BGIS)

Races featuring Members of Parliament and local entertainers will be among the fun events at this year’s National Senior Games.

In response to complaints that the games had become “too serious” over the years, resulting in a decline in interest by the general public, the organizing committee has this year gone all out to return fun activities to the event.

In addition to the celebrity races, there will also be the return of a crowd favourite called Dem Say We Ain’t Stan A Chance, which caters to those who many would not normally expect to see on a track, but who are out to prove that they still have what it takes.

The National Senior Games Committee has also joined with the National Cultural Foundation to produce a cultural display featuring green monkeys, stilt walkers and tumblers.  A host of activities for children are also on the cards.

At a press conference held today, a trio of Ministers, comprising Minister of People Empowerment and Elder Affairs, Cynthia Forde; Minister of Health and Wellness, Lt. Col. Jeffrey Bostic; and Minister of Creative Economy, Culture and Sports, John King, urged public support for the games, both by participants and spectators.

Minister Forde signalled government’s intention to produce “a high-quality suite of games”.  She encouraged support not only for the popular 5K walk and run and the track and field finale, but for all 13 disciplines in which seniors will compete.

“Support your relatives, friends and neighbours as the ministry endeavours to promote the concepts of fellowship, fair play, fun, family and fitness,” she urged.

Minister Bostic stressed the importance of active ageing, noting that while Barbadians were living longer, they were often impacted by non-communicable diseases.

He said this was of concern to his ministry, and therefore there was much emphasis on wellness initiatives.  In this regard, he added, he fully supported and endorsed the senior games, pledging to display this support in a practical way through his involvement in the table tennis competition.

Minister King also announced that he would be participating in the games.  He said that while it was believed by many that sporting activities were only for the young, this was far from the case.

“The effort this year to rebrand the Senior Games must be seen as the beginning of a new culture which nurtures seniors not only physically, but also socially.

“I commend all those involved in putting these games together for 2019, and I’m sure this will be a new jumping off point for the event,” the Minister with responsibility for Sports stated.