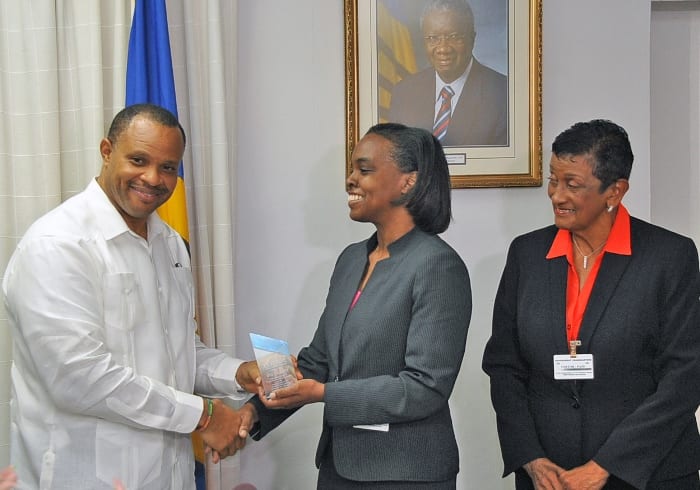 Government has retained some of the funds it received from its disaster insurance policy to fix a number of roads across Barbados, including the one at White Hill, St. Andrew.

Minister of Finance, Christopher Sinckler, made the disclosure today, as he addressed a brief ceremony where Director of the CCRIF (formerly the Caribbean Catastrophe Risk Insurance Facility), Faye Hardy, presented him with a “special payout memento” for US $1.728 million.

Mr. Sinckler told his audience: “A part of those resources is still earmarked to go towards the restoration of White Hill, but there are some engineering and environmental challenges at White Hill that are not easily dispensed with.

“I know the Ministry of Transport and Works has commissioned a major engineering assessment to be done before we go in and try to put in a permanent fixture in there.  We have done some temporary stuff there with some of the resources, yes, but that is not going to hold because … it’s a Scotland District area and it has always been subject to slippage.”

The Minister said the engineering questions which arose were, “would it be wise to spend the resources at White Hill and then something occurred and damaged the road again, or should the area be abandoned and the residents relocated?”

“There have been varying opinions…. Geologists are studying the typography of the area and are advising Government, and their simple advice so far is, you don’t rush and do anything in there because you may not get the result that you want long term. So, we have been holding on that, but whilst we are doing that there are other roads that have been affected by the excess rainfall and we have been utilising those resources,” he pointed out.

Mr. Sinckler disclosed that Government would use the money from this last payout to repair roads, but he pointed out that remedial work would have to be done in some low lying areas.

He noted that the disbursements from CCRIF had been quick and timely, and suggested that Barbados’ Catastrophe Fund, which has its own challenges in terms of access to the fund, should be reformed.

“I made the suggestion that given the wonderful work that CCRIF has been doing, that we reform that Catastrophe Fund and the legislation. The staff has worked on some recommendations which they have made to me as Minister, and which I agree with, to have some of those resources put into CCRIF products, where we can buy additional coverage for events,” Mr. Sinckler stated.

He said CCRIF has demonstrated that it has the appropriate products for the circumstances and described the disbursement model being used as “very efficient”.

CCRIF’s Board Member, Desiree Cherebin, said two payouts were made to Barbados for Tropical Storm Matthew, one under its Tropical Cyclone policy and the other under its Excess Rainfall policy.  According to her, the four payouts made since the organisation’s inception totalled in excess of US$11.6 million.

Ms. Cherebin pointed out that all of its payouts were made within 14 days of an event, thus bringing immediate relief to the region.

“By October 17, 2016, CCRIF completed payments totalling US$29.2 million to the four CCRIF member countries affected by Hurricane Matthew. These payouts were made to Haiti, Barbados, St. Lucia, and St. Vincent & the Grenadines on their Tropical Cyclone and/or Excess Rainfall insurance policies. These swift payouts were possible because of the products’ parametric nature,” she explained.