Future Of Multilateralism Under Threat 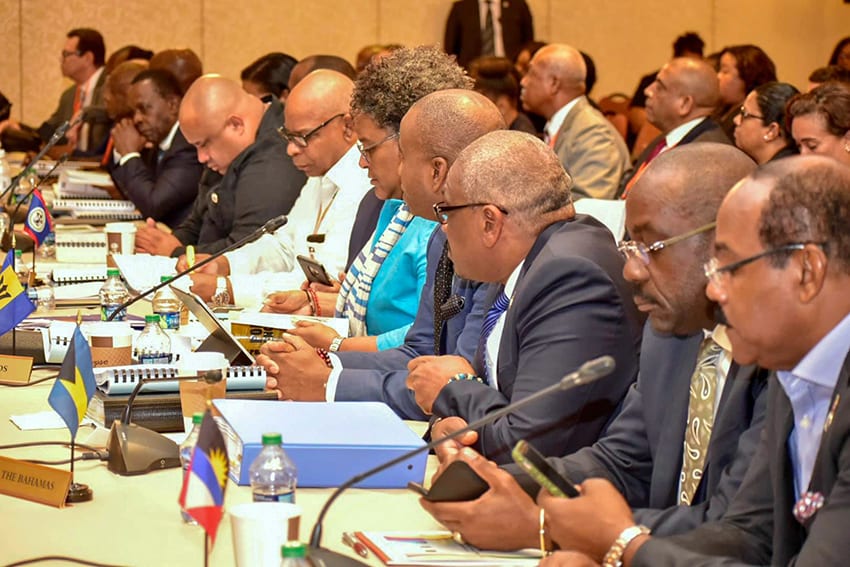 Barbados’ Prime Minister, Mia Amor Mottley (in blue) and CARICOM Heads of Government during one of the sessions at the 30th CARICOM Intersessional Meeting in St Kitts and Nevis. (Prime Minister’s Office)

The future of multilateralism is under threat if CARICOM nations don’t collaborate and effectively implement the CARICOM Single Market and Economy (CSME).

Prime Minister Mia Amor Mottley made this assertion, as she addressed the plenary session of the 30th Intersessional Meeting of the Conference of Heads of Government of the Caribbean Community (CARICOM) on Tuesday in Basseterre, St Kitts and Nevis, at the St. Kitts Marriott Resort and Royal Beach Casino.

Ms. Mottley told fellow Heads of Government that if CARICOM nations were to survive and thrive in the global context, then the implementation of the framework that constitutes the CARICOM Single Market and Economy was critical.

She said: “If we have learnt one thing, the future of multilateralism is threatened at the very time that it is needed more than ever. Small states such as ours will only survive, not just economically, but in the world of diplomacy, in the context of strengthening democracies, if we have a framework.

“…. More than ever we need to be able to stay together, whether it is in fighting the European Union with respect to the blacklisting issue…. Today is my turn, tomorrow is yours.  Whether it is with respect to our position with Venezuela, which predominantly has been the position of the world, in that six weeks ago people were not calling for dialogue.  Now, all but one has repudiated military intervention. Our economies are not necessarily capable of surviving on their own in this difficult and turbulent world.”

She added that the disruption to the multilateral trading environment and the dispute resolution mechanisms were just symptoms of the underlying war that was taking place in today’s world, especially since some countries were now fighting for technological dominance to determine who controls technology.

She noted: “We have been viewed as irrelevant to the process, both diplomatically and economically.  Our only way out is to turn this region into an economic power note within the Americas.  It cannot happen with individual countries trying to push…one by one, but if we come together in the context of a strong Single Economy and a strong Single Market, all of a sudden it looks different.

“In realizing this, it becomes clear that 16 to 17 or 18 million people, depending on whose numbers you look at, and the 500,000 square kilometres is equivalent to California, but California is the fifth largest or the sixth largest economy in the world. Where is the Caribbean?  And at what point do we determine that a land space needs a greater level of population to drive economic growth?”

In light of the economic realities, the Prime Minister noted that there were a few “smarter” and “seamless strategic decisions” that needed to be made to fuel economic growth, and to place the region on an upward trajectory, noting that this was the raison d’etre of the CSME, for which she has lead responsibility.

She further added that it was detrimental to the region to “take three steps forward and two steps back”, instead, she called for a “Usain Bolt approach”, and not a carnival like approach to the movement of the CSME.