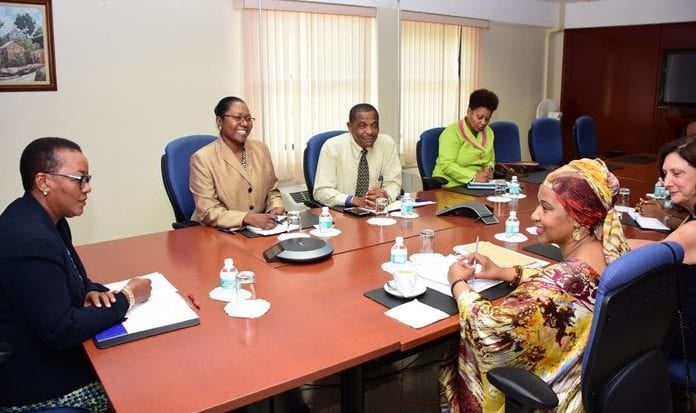 Foreign Minister, Maxine McClean (left) and Executive Director of UN Women Phumzile Mlambo-Ngeuka (right) discussing the issue of women and leadership during their recent meeeting while officials look on. (C.Pitt/BGIS)

Although excelling academically, women still have a greater role to play when it comes to leadership.

That was the view expressed by Executive Director of UN Women, Madame Phumzile Mlambo-Ngeuka, when she recently visited this country’s Foreign Minister, Senator Maxine McClean, at her Culloden Road office.

Also present at the meeting was Regional Director of UN Women for the Americas and the Caribbean, Luiza Carvalho, other UN officials and Chief of Protocol, Philip St. Hill.

The Minister, agreeing with this view, pointed out that while females took the lead from a young age academically in Barbados, men were still dominant in terms of leadership positions, and this was very prevalent.

During the discussion, which focused mainly on gender equality and women’s empowerment, the two officials also touched on gender studies; the lack of leadership among women; entrepreneurship; and the World Food Programme, which is searching for countries to cooperate with women farmers.

On the topic of entrepreneurship, the Minister commented that she was interested in seeing women move away from lifestyle businesses and focusing instead on moving into the global market.  She also noted that there was a stark difference between owning a business and being an entrepreneur.

Madame Mlambo-Ngeuka also praised the Minister for taking the lead on issues affecting small island developing states, and the progress made on violence against women legislation.

Haiti was also discussed, with both officials expressing dismay at the inability of the global community to provide more than emergency aid.

Madame Mlambo-Ngeuka also took the opportunity to congratulate Barbados on its golden anniversary of Independence.

UN Women, also known as the United Nations Entity for Gender Equality and Women’s Empowerment, was formed in July 2010 from a UN resolution that merged various UN Women’s agencies, particularly the UN Development Fund for Women (UNIFEM), as part of the UN reform process.