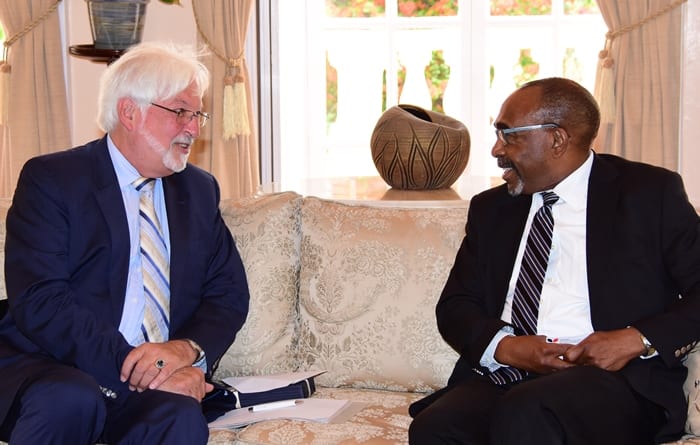 Germany is seeking Barbados’ support for its candidate for the United Nations Security Council 2019 – 2020.

During a courtesy call at Ilaro Court yesterday, Germany’s Special Envoy, Peter Linder, put the case in support of the candidature to Minister in the Prime Minister’s Office, Senator Darcy Boyce, who was deputising for Prime Minister Freundel Stuart.

Mr. Linder urged a favourable vote from Barbados on the matter and Senator Boyce consented to convey the request to Prime Minister Stuart.

Ambassador Linder said that Germany was placing great emphasis on issues of international peace and security, as well as climate change, and he stressed Germany’s commitment to the Paris Climate Change Agreement.

Senator Boyce welcomed Germany’s commitment to the agreement, noting that the Caribbean had already seen the negative effects of climate change and was spending “a vast amount of money” to secure its coastlines.

International peace and security was also very high on Barbados’ agenda, he said, particularly because of the island’s dependence on tourism and international business for its economic survival.

He drew to the attention of the Special Envoy the difficulties Barbados has encountered with the Organisation for Economic Cooperation and Development (OECD), in respect of maintaining its status as a clean jurisdiction, despite its compliance with all the regulations pertaining to financial services.

He urged Germany to take the lead in requiring the OECD to be consistent in its approach, and to make it clear that “they can’t keep moving the goal post”.

Senator Boyce also raised the issue of a tax information exchange agreement with Germany, which remained unsigned, as well as the possibility of a double taxation agreement between the two countries.

The Minister with responsibility for Energy also told the German diplomat that Barbados would welcome technical assistance in the area of renewable energy and energy efficiency.