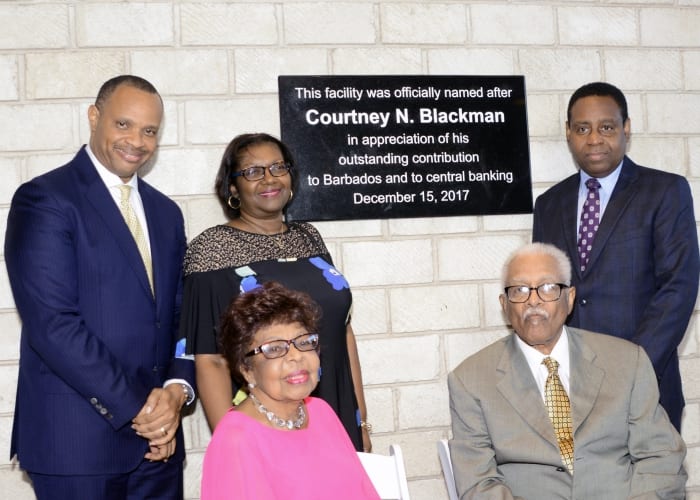 The two to one peg which Barbados has held with the United States dollar since the advent of our own Central Bank, will be maintained.

This assurance came as Minister of Finance and Economic Affairs, Christopher Sinckler addressed those gathered at the Frank Collymore Hall, last Friday evening, to witness the naming of the Grande Salle after the first Governor of the Bank, Sir Courtney Blackman.

As Sir Courtney was praised for his visionary leadership and management of the economy, Minister Sinckler recalled it was both he and the late Prime Minister, now National Hero, the Right Excellent Errol Walton Barrow that determined the two to one exchange rate for its convenience to tourism and its psychological appeal to the Barbadian populace.

“The shift took care of the high and volatile inflation rates and contributed to stabilizing our economy,” he said while referring to it as a “futuristic step” that demonstrated boldness and courage on the part of both men.

Mr. Sinckler stressed the peg had been “the bedrock of our economic stability” and acknowledged it had been driven by Sir Courtney.  “His was the view that the two to one peg was to be defended relentlessly, and that to achieve this objective, we had to prudently manage our fiscal affairs, something which, I am sure, we all agree as a policy stance remains very, very relevant and applicable today,” he declared.

Further pledging his commitment to the peg, the Finance Minister said: “Indeed, the Government, of which I am a part, remains committed to maintaining that peg, at all costs. We recognize that an integral part of the framework for sustaining such an exchange rate is fiscal discipline.  We are all agreed as well that in recent years, we have deviated from the strictest of those disciplines… we must return without delay.”