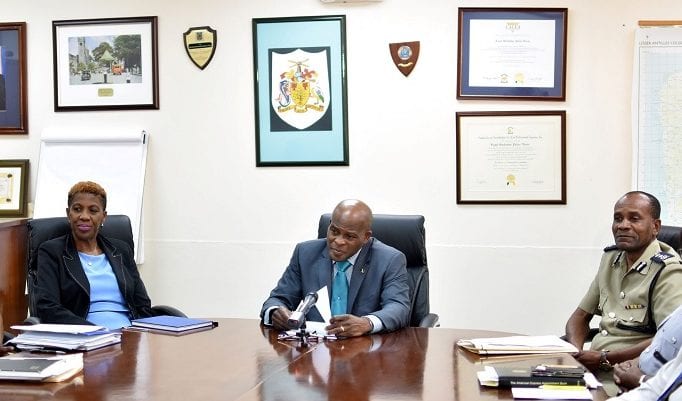 Minister of Home Affairs, Edmund Hinkson, has reaffirmed Government’s commitment to providing the Royal Barbados Police Force (RBPF) with the necessary equipment to effectively carry out its duties.

Commending the RBPF and the Barbados Defence Force for “a job extremely well done” during the recent Crop Over Festival, Mr. Hinkson said: “We are committed as a Government to equipping the Force with modern technology such as smart phones, tablets, computers and dash cams, [and] to expanding the use of CCTV cameras in high traffic areas to improve your ability to detect crime and enforce law and order.”

He added that meant sourcing the necessary funds to give lawmen the resources they required to carry out their jobs effectively.

The Minister made these comments during a meeting at Police Headquarters yesterday, with Commissioner of Police, Tyrone Griffith and his Deputy, Erwin Boyce, and other senior  members of the RBPF.

“I want to commend the armed forces and protective services for a job extremely well done; the Police and Defence Force coming together to ensure that the public was kept as safe as could possibly be,” he said, noting that a generally incident and violence free season was testimony of this fact.

Mr. Hinkson acknowledged that it was not an easy job to put one’s life, health and safety on the line daily. “I thank you as Minister of Home Affairs and in charge of the police for your sterling efforts and your presence in keeping our people safe,” he told the Force’s high command.

Meanwhile, he reminded those present that Government remained committed to improving the physical working conditions at police stations, and gave the assurance that the new one at Hastings, Christ Church, would be open by year-end.

The Minister also noted that Government would be working more with the police, in terms of community development, to assist with the maintenance of law and order, particularly in the criminal hot spots.

He added that policies, policing programmes and strategies were also being developed to ensure the continued safety of residents and visitors to the country.

At the same time, he encouraged residents of communities to either establish or reactivate neighbourhood watches to assist police in the fight against crime.

Meanwhile, he noted that the Ministry of Youth and Community Development recently established the first phase of its Building Blocks Programme, which was being developed to provide a comprehensive community-based initiative to address unemployment, crime and violence issues.