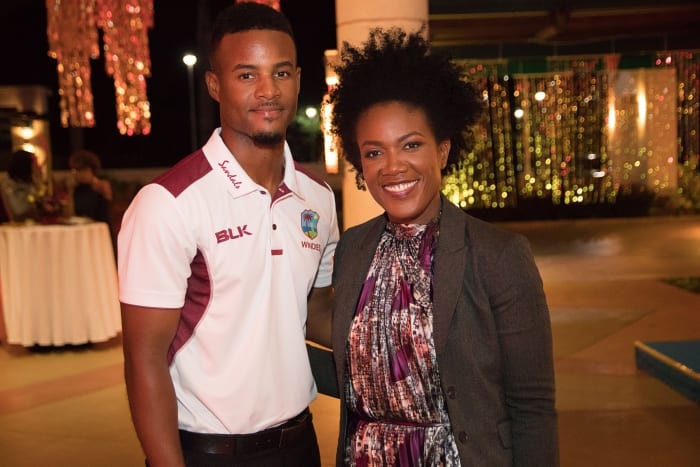 Government has expressed its commitment to West Indies cricket, with Minister in the Ministry of Economic Affairs and Investment, Marsha Caddle, saying the sport is one of the ways countries in the region will be able to move forward.

Ms. Caddle made the comments last night as she delivered the feature address at the Cricket West Indies/West Indies Players’ Association’s Awards Ceremony, at the Barbados Hilton Resort.

According to her, it was necessary for the Caribbean to move the brand of cricket and what it represented to a new place. “We need to look at how we diversify our brand and how we marry the things that make us Barbadian and make us West Indian. Cricket and sport in general is a big part of how we do that.

“We have said as a new Government that there are some things that we have to do differently when it comes to how we invest, the types of things in which we invest, where we invest, and at what stage of people’s lives [do we invest]. For us, cricket and sport in general represent not just an industry but also a way for us to signal to young people that there is something else they can do with their talent…”

The Minister is of the view that sport must be better integrated into education. She suggested that it must be invested in as a viable industry for young people and stressed that Government would undertake such going forward.

She stated that in making adjustments to an economy, as Barbados is currently doing with its recovery programme, Government must ensure there was a platform for growth and transformation.

“That growth is not just in terms of creating new jobs and new investments in traditional sectors such as tourism and construction, but it is also in understanding that there are some…non-economic inputs that you have to make to be able to help a country grow.

“One of the things we have said as a Barbados Government is that our investment in education has to look a bit different. We have said…that we must move to the place where…within our secondary school system, we create Centres of Excellence for several disciplines and one of those disciplines must be sport,” she noted.

Ms. Caddle added that greater linkages must be made and suggested that tourism, for example, should benefit more greatly from what was happening with cricket. “We feel that as a region we have not been able to marry sufficiently the tourism sector and what we offer with cricket and with other sporting activities,” she said.

She stated that Government’s aim was to grow the tourism product and showcase sport as an economically productive sector and use it to increase the tourism revenue in the region.

She disclosed that Prime Minister Mia Amor Mottley had met with some of the Ministers to discuss how an industry could be created from what happens in West Indies cricket.

“How we are able to use the Caribbean as a sporting hub for international events to which people can come, to be able to do that we have to make the right investments in our infrastructure and our people,” she suggested.

Minister Caddle indicated that the historic cricketing grounds in this region, which have a rich legacy, should be showcased.