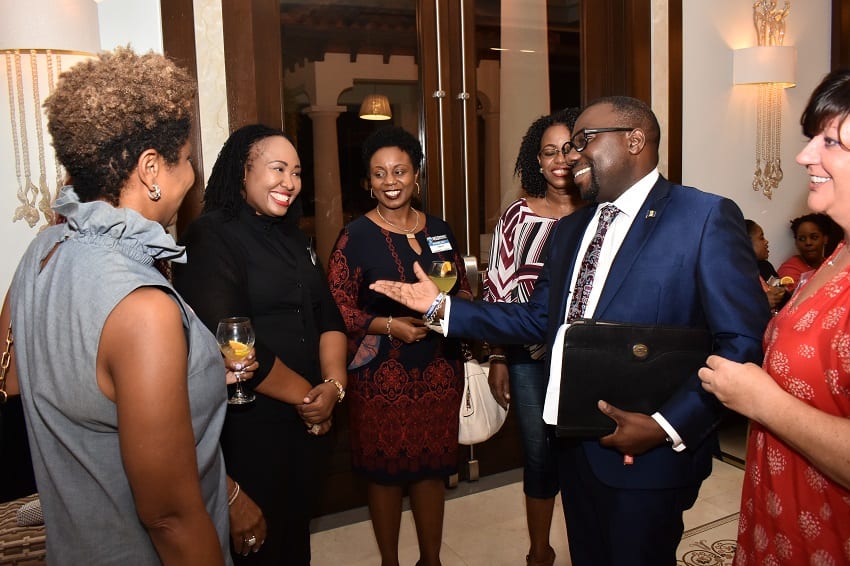 Minister of Small Business, Entrepreneurship and Commerce, Dwight Sutherland, chatting with some of the attendees at last Friday’s celebrations to mark Women’s Entrepreneurship Day at Sandals Royal Barbados. (C.Pitt/BGIS)

Government, cognizant of prevailing gender disparities, is encouraging female entrepreneurship on the island.

This was underscored last Friday by Minister of Small Business, Entrepreneurship and Commerce, Dwight Sutherland, as he addressed celebrations to mark Women’s Entrepreneurship Day, at Sandals Royal Barbados.

Declaring that his mandate included building Barbados “from the bottom up” by creating new opportunities for the creation of new wealth, the Minister said: “A major objective is to transform Barbados into an entrepreneurial society, characterized by the presence of at least one entrepreneur in each household; and it doesn’t have to be a male.”

He noted a significant step towards achieving this objective was made with his Ministry’s launch of the Trust Loan Fund on October 31, and encouraged members of the Women’s Entrepreneurship Day Organization (WEDO), to empower their peers and access the Fund.

While noting that synergies existed between what WEDO does and what Government intends to do as it seeks to rebuild Barbados from an entrepreneurial perspective, Minister Sutherland stressed that gone were the days when entrepreneurship was seen as predominantly a male undertaking.

Using the recent disbursement of monies under the first tranche of the Trust Loan Fund to highlight this, he said four females were among the six recipients. “Indeed, that has signalled the role women will play in building out the entrepreneurship culture in this country and certainly WEDO has a major role to play,” he said.

Sharing statistics from the Global Entrepreneurship Monitor (GEM) Global Report 2017/2018, the Minister said it revealed that women were less likely than men to be involved in entrepreneurial activity regardless of the level of economic development.

Stating that this was within women’s favour, he contended they were more likely to start businesses out of necessity compared to men, in all regions, except in North America.  He also disclosed that Latin America and the Caribbean had the highest average female Total Early-stage Entrepreneurship Activity (TEA) rates of 16.7 per cent, for the second year in a row.

Of the Barbados situation, Mr. Sutherland said the most recent study regarding women in entrepreneurship, done in November 2014 by the then Cave Hill School of Business, concluded that women were less involved in entrepreneurial pursuits compared to males and less than one-half of the female population or 40 per cent were optimistic about opportunities to start a business in the near future.

He said it further revealed that only a small percentage of the female population or 15.2 per cent had signalled their intentions of starting a business in the near future.

“Among those countries considered to be transitioning from efficiency-driven to innovation-driven economies, Barbados has the highest percentage of females engaged in TEA or 20 per cent. Among other countries at the same stage of development, Barbados had the second highest percentage of females, that is eight per cent, who have transitioned from early-stage entrepreneurs to established business owners. So, women are indeed emerging and we recognise the role women have played in really building this country.

“The female business discontinuance rate in Barbados was low at about four per cent. The main reason for discontinuance was linked to personal rather than profitability factors. So, it is saying that women are more ‘not inclined’, you don’t focus more on the profit but on the other reasons that impact; perhaps it could have been the family life and other personal factors,” the Minister suggested.