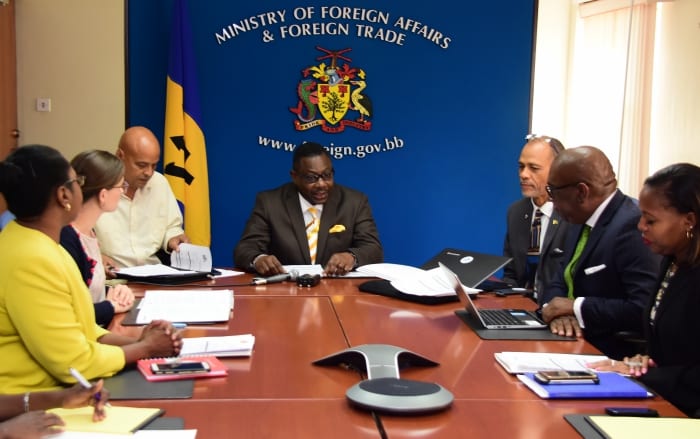 The Ministry of Health is in the process of creating a National CBRN Contingency Plan for Barbados to protect its environment and citizens against Chemical, Biological, Radioactive and Nuclear (CBRN) hazards.

The Acting Minister told his audience that the objective of the plan was to devise a set of emergency procedures that would govern an inter-agency coordinated response to a CBRN threat.

Quoting from the United Nations Security Council Resolution (UNSCR) 1540 mandates which state that all States shall refrain from providing any form of support to non-State actors that attempt to develop, acquire, manufacture, possess, transport, transfer or use nuclear, chemical or biological weapons, the Minister queried what was the best way to ensure that Barbados did not become a destination or a trans-shipment point for a dangerous biological agent or toxic chemicals.

“How do we secure our environment and people from this ever-evolving threat? The answer involves the implementation of a comprehensive legal framework that is responsive to current CBRN threats and that facilitates effective enforcement. This legislative awareness workshop is therefore timely, as it provides a platform to foster discussion on the obligations of the relevant international legal instruments and to identify the gaps in Barbados’ national legal framework. Your attendance here is testament to Government’s political will in this regard,” Mr. Blackett said.

The Acting Foreign Affairs Minister expressed the hope that the information from the workshop would provide an avenue for the exchange of ideas on several legislative issues.

Meanwhile, Senior Legal Officer with VERTIC, Dr. Sonia Drobysz, said the incidence of illicit activities with its associated dangerous pathogens, toxic chemicals and nuclear materials as well as the vulnerability of the Caribbean as a dangerous transshipment hub, necessitated the need for the development of a robust legal framework to secure all activities with CBRN materials.

She continued: “The objectives of this workshop are to discuss the obligations in the [UNSCR1540 legal instruments], and to identify the gaps in Barbados’ legal framework for the control of dangerous biological materials, chemicals and nuclear materials which could pose a proliferation risk.  On the basis of this assessment, further steps will be taken to fill those gaps which the Government has identified.”

The workshop attracted participants drawn from the Ministries of Foreign Affairs, Agriculture and Home Affairs; the Office of the Chief Parliamentary Counsel, the Environmental Protection Department, the Customs and Excise Department and the Barbados Defence Force.