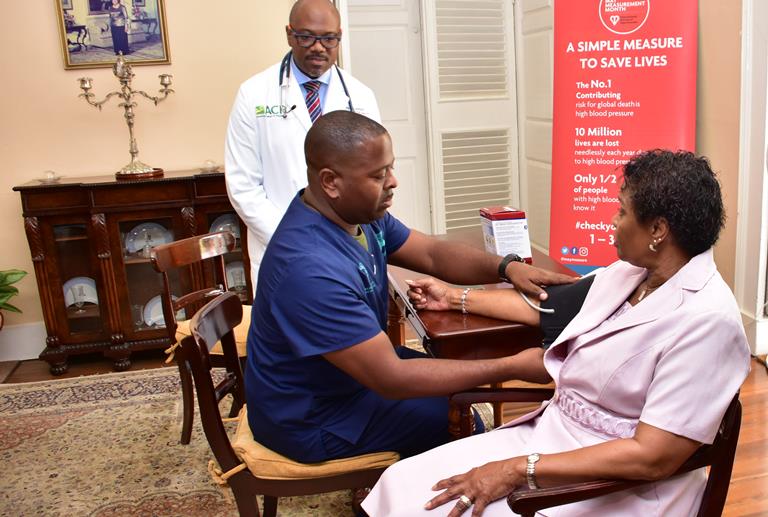 As part of its activities for May Measurement Month and to mark World Hypertension Day, the Heart and Stroke Foundation of Barbados (HSFB), partnered with the Barbados Defence Force (BDF), to establish a blood pressure monitoring site at Government House today.

Governor General, Dame Sandra Mason, who is also the Patron of the HSFB, participated in the event, along with the 16 members of staff and other ancillary personnel assigned at Government House.

Lecturer in Clinical Pharmacology at the University of the West Indies and President of the HSFB, Dr. Kenneth Connell, said that his organisation was “very pleased” to hold the event at Government House, as it signalled a message to the general public of “the seriousness of hypertension as a silent killer”.

“This year, the Heart and Stroke Foundation has teamed up with more than 130 countries internationally to mark May Measurement Month. With our valued partner the Barbados Defence Force and our theme: Drilling Down the Numbers in 2018, we’ve been screening blood pressures around the island during the month,” he explained.

The physician noted that the first step was awareness that one had hypertension, before treatment began. Treatment, he explained, could include lifestyle changes such as removing the amount of salt in one’s diet; getting regular exercise; avoiding stimulants such as caffeine, tea and coffee; as well as taking part in aerobic exercise daily, such as walks for more than half-an-hour.

“It also involves taking medication as prescribed. Hypertension has no cure. Once on medication, you should continue taking it,” he advised.

Chief Executive Officer of the HSFB, Fiona Anthony, stated that following the success of the inaugural May Measurement Month in 2017, her organisation wanted to “scale up the project and increase the activities to increase the message with respect to awareness of hypertension and the dangers of high blood pressure”.

She also expressed her gratitude to the BDF for its assistance with the initiative.

“Their great support has been key to the success of this project and, through the screenings at the monitoring sites that we have been able to establish, we have been raising awareness; identifying persons who have high blood pressure and weren’t aware of it; and providing the necessary advice as to what the next steps are, whether they be lifestyle changes or seeking medical advice from a physician,” Mrs. Anthony stated.