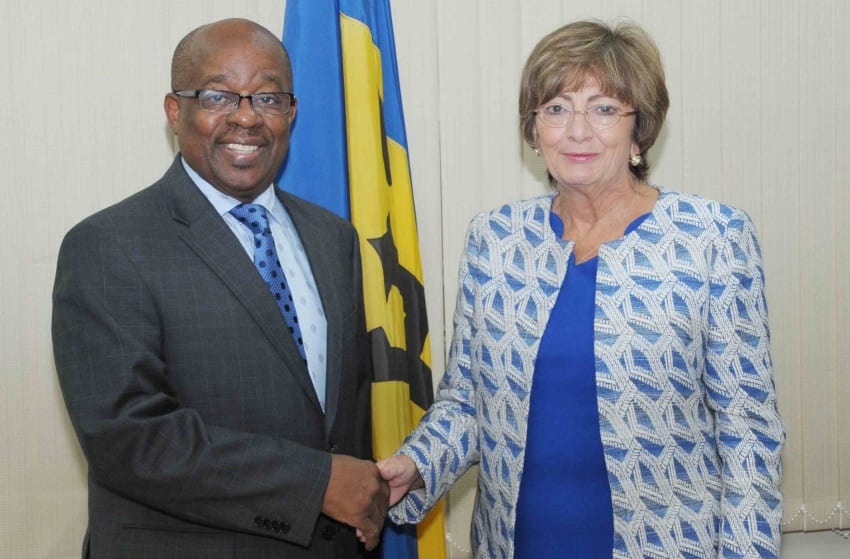 Minister of Housing, Lands and Rural Development, George Payne, has revealed that there are some 30,000 applications at the National Housing Corporation (NHC) for low-income housing.

Speaking during a courtesy call with United States Ambassador to Barbados, Linda Taglialatela last Wednesday, the Minister said that the challenges facing the NHC included housing units being occupied by tenants who were owners of other properties; housing units being rented out while the registered tenants lived elsewhere; tenants moving out and allowing other persons to take over occupancy unknown to NHC; and delinquent tenants who paid the first month’s rent and refused to pay any more.

“Government never thought when seeking to assist poor people, that the system would be exploited in this way. The housing programme is being sabotaged by some people Government sought to help. We will have to look at the legislative framework to see what can be done to bring a more disciplined approach to the transfer of government units,” he submitted.

The Minister also lamented the dwindling stock of Government-subsidized housing available for rental. He explained that the programme introduced by the previous Government which allowed persons occupying housing units for 20 years or more to purchase these properties had reduced the available housing for rental to about 1,200 units. As a result, a number of units, though unoccupied, are no longer in the system.

Minister Payne also addressed the issue of the more than 1,800 derelict buildings and 4,000 pit toilets across the island and told the Ambassador that his Ministry would welcome any assistance in alleviating these problems.

He added that Government was also seeking funding to address the challenges posed by squatters, particularly those living in the Zone One Water Protection Areas. One possibility, he revealed, was to acquire lands outside of these areas where alternative housing could be provided for households. Another, he suggested, was to install sewage facilities to these areas. He, stressed, however, that he would not condone squatting on either Crown or private lands.

In response, Ambassador Taglialatela said that she welcomed the opportunity to visit the Ministry and hear first-hand about its programmes. There were some areas where collaboration would be possible, she revealed, and added that the US Embassy looked forward to exploring them more fully.