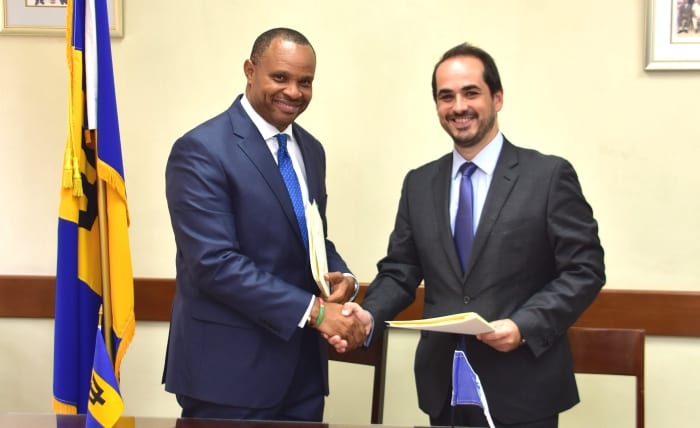 Minister of Finance and Economic Affairs, Christopher Sinckler, and Chief of Operations at the IDB, Francisco Javier Urra, shake hands following the signing of the document for a US$20 million loan last Friday at Government Headquarters. (C.Pitt/BGIS)

Government has signed a US$20 million loan with the Inter-American Development Bank (IDB) for a National Tourism Program, which is expected to give Barbados’ tourism industry a necessary fillip.

Minister of Finance, Christopher Sinckler, and Chief of Operations at the IDB, Francisco Javier Urra, signed the document last Friday, at Government Headquarters.

The Program, which will be implemented over a five-year period, has as its overall objective to increase the resilience of Barbados’ tourism industry, with a focus on increasing tourism receipts. The components include developing four new tourism products targeted at addressing the cultural and heritage priority themes; strengthening digital marketing; and improving airlift.

Mr. Sinckler said Government and the tourism players had invested a lot of resources in promoting Barbados as a premier destination in the tourism field, especially in the traditional markets.  But, he added, there was always a demand to upgrade and diversify the product, as well as introduce new ones.

He continued: “We discovered that with the emergence of new destinations, particularly in the Mediterranean, even in South America, traditional tourism markets like Barbados were being put under considerable pressure as people were going after the same tourists that we wanted. We recognised that if we were to regain our strong footing in the markets, then we would need to seriously look at reforming and refreshing the tourism product.”

Stressing therefore that this was a good partnership with the Bank, he continued: “The IDB has a very strong South/Latin American presence and therefore it is a win-win for all as we tap into those historical links. The National Tourism Program will help us to diversify and upgrade our product offering and it will help with some marketing as well.”

Mr. Sinckler added that conversely, it would give the IDB an opportunity to venture into new economic partnerships with members, in areas that were not necessarily traditional to the Bank. “This is a perfect type of project that will bring vast benefits for Barbados and I believe going forward, it will put a platform for Barbados’ take off in the South American market,” he opined.

The Minister thanked the IDB for again finding an appropriate, critical and important opportunity to partner with Barbados to assist in building its economy and society.

Acknowledging that the loan process had been a long one, Mr. Urra stressed that it was inclusive as his organisation had extensive consultations with various members of civil society, including taxi drivers and vendors.

“Barbados has an impressive history in terms of reaching good quality, high-level tourism; [but] the challenge is to keep it,” he stated, adding that the loan would greatly assist in that regard.

He continued: “Barbados is a very mature market but with a lot to offer…. It is a country with history, heritage and culture, that people enjoy visiting. Barbados has done a great job in general by making a contrast with other Caribbean destinations that just offer sun and beach tourism…. That is why tourists keep coming back because there is an emotional and personal connection.”