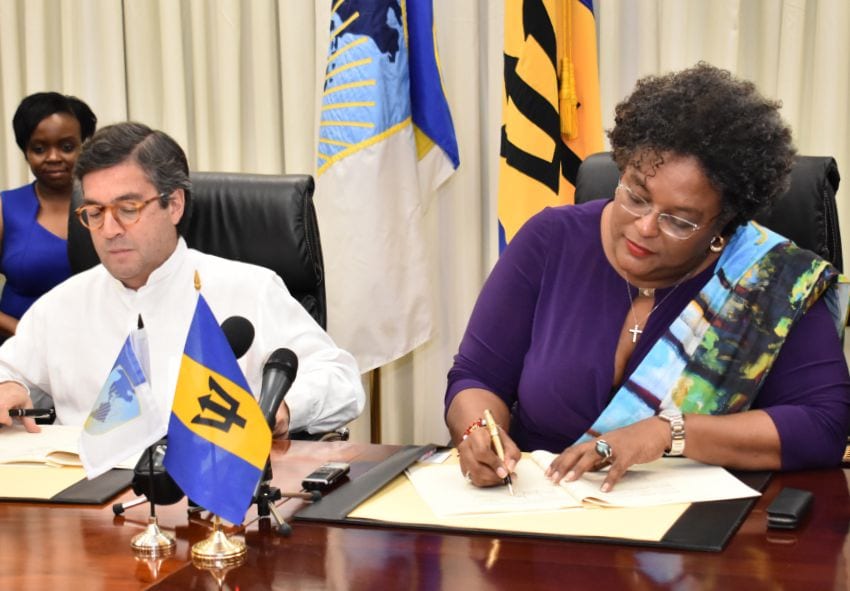 After signing the document at Government Headquarters on Sunday, Ms. Mottley said the Special Development Loan was one of the first being granted by the IDB. The concessionary loan from an official lender is part of Government’s overall debt and interest reduction strategy.

“It has been triggered by the IMF’s backing of the Barbados Economic Recovery and Transformation (BERT) Plan and reflects confidence in the path that the Government of Barbados has chosen to get out of the difficult economic circumstances we inherited….

“I have been telling the country for the past week that normal service is resuming. We have been travelling a road that allows us to see all of the right sign posts that tell us we are going in the right direction. We are not yet where we want to be, but we are confidently on our way to getting there,” she stated.

The Prime Minister noted that the interest rates on the loan were significantly lower. “It also allows the country to create a buffer in our foreign reserves…. Once these funds are received from the IDB, the Government of Barbados will end this calendar year for the first time in a very long time with over $1 billion in reserves,” she pointed out.

President Moreno said he came to Barbados in June this year and he and Prime Minister Mottley and their team outlined the way forward. Since then, he added, there were a number of changes in the country for the better, including the IMF backing of the BERT Plan.

“I know how difficult is the situation she [Prime Minister Mottley] inherited and I equally know when a country makes a decision to…bite the bullet it deserves all of the support from the international community…. 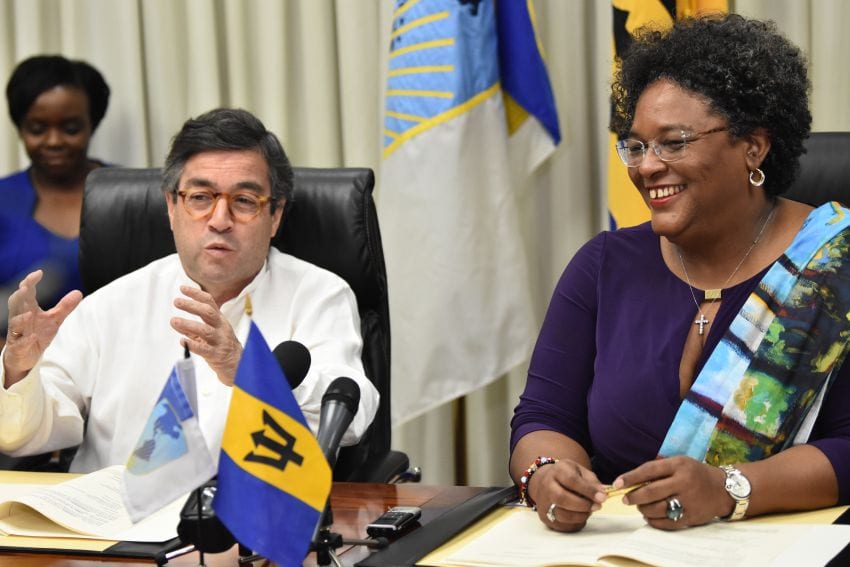 Prime Minister Mia Amor Mottley is pictured smiling as President of the Inter-American Development Bank (IDB), Luis Alberto Moreno speaks to the media following the signing of a US $100 million loan yesterday at Government Headquarters. (C.Pitt/BGIS)

“There is a growing confidence in the direction of many of the difficult but correct policies that Prime Minister Mottley is taking. We can see it already with what the rating agencies have done by upgrading the rating several notches to B- with a positive outlook going forward,” he stated.

President Moreno thanked the team and Minister in the Ministry of Economic Affairs and Investment, Marsha Caddle, saying that in a short period of time they worked out a number of critical details.

He noted that previously, Barbados had slowly executed its projects and there was about $150 million of outstanding loans. However, he pointed out that things were now happening and this year alone about $20 million would be spent on roads.

“We will be discussing with the Prime Minister other areas that we can start to prepare for next year. So, I think this is the opportunity to not only turn the page, to focus on the new Barbados but really to reform this State, to embrace this new technological revolution that we are in and to find new sources of growth for Barbados. That is the kind of challenge that we are committed to supporting,” he told the Prime Minister.

This Special Development Lending Facility is a budget support lending instrument which was designed specifically to address macroeconomic crises and to protect social and economic progress while a country is restructuring its debt and economy. It builds a bridge to cover the country’s financial needs in 2018 as Government prepares and implements key structural reforms.

The main objectives of the programme are to support the Government’s efforts to regain macroeconomic stability; implement fiscal adjustment measures that foster a sustainable fiscal balance in the short and medium term; and protect social spending to safeguard social gains achieved.

The Ministry of Finance, Economic Affairs and Investment will act as the Executing Agency and will be responsible for the overall financial management and implementation of the programme.