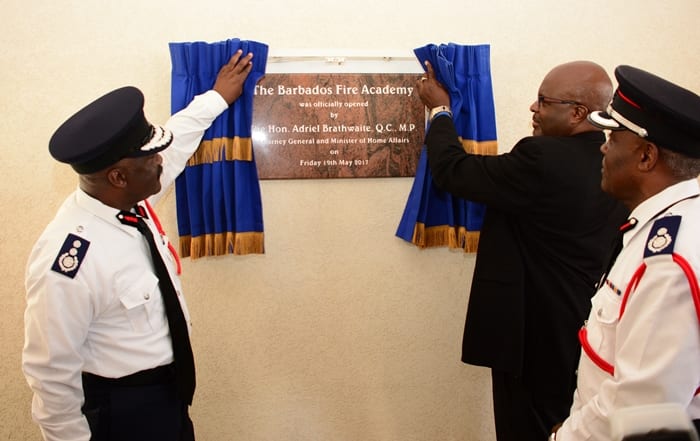 A $5 million investment by Government should see the Barbados Fire Service (BFS) receiving three new fire tenders by the end of next month.

The new appliances join the three the BFS received last year as part of Government’s commitment to ensuring that that department was adequately equipped to meet the needs of the society.

Furthermore, Minister of Home Affairs, Adriel Brathwaite, disclosed that Government would also be seeking to have a new mechanical workshop at Seawell, Christ Church, within the next year to assist with maintaining that equipment.

Speaking during the re-opening of the Arch Hall Fire Station last Friday, Mr. Brathwaite explained that although the company Angloco serviced the tenders, Government wanted to take on more of that responsibility.

The re-opening of the Arch Hall Fire Station also signaled the end of an era for the St. James Fire Station at Weston, St. James, which was subsequently closed.

However, Mr. Brathwaite sought to quell fears that the closure of the St. James station would place persons living in the north of the island at risk.

“…It is unfair and uncharitable for anyone to suggest that the people in the north are more at risk because of the closure at Weston. Two tenders will be here (at Arch Hall) continuously. With the [Barbados Fire] Academy you will actually have personnel here on a continuous basis,” Mr. Brathwaite stressed.

He assured the public that the safety of persons in the north of the island would be in no way compromised as a result of the closure of the west coast station.