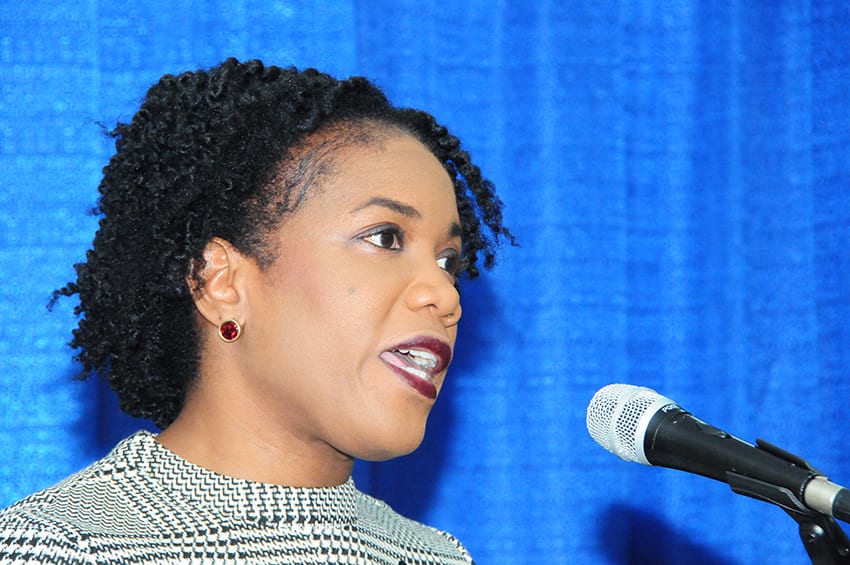 Minister in the Ministry of Economic Affairs and Investment, Marsha Caddle addressing this morning’s Stakeholder Review on the Planning and Development Bill 2019 at the Lloyd Erskine Sandiford Centre. (B.Hinds/BGIS)

Government is expected to establish a “doing business” subcommittee of Cabinet to tackle how business is conducted in Barbados.

This disclosure came today from Minister in the Ministry of Economic Affairs and Investment, Marsha Caddle, as she addressed the opening of a Stakeholder Review – Planning and Development Bill 2019, at the Lloyd Erskine Sandiford Centre.

Ms. Caddle said that once the subcommittee is approved by Cabinet, it would be supported by a competitiveness council, which would be a smaller subcommittee of the private sector, trade unions and other parties.

The Minister explained that the creation of a subcommittee was “not to have general discussions about productivity and ideological discussions about competitiveness…. These committees are to get to the business of improving these doing business rankings…and improving these indicators, so Barbados works for Barbadians and those who want to come and live and work here.

“And so we have made a commitment to get to the root…of what is impeding business and investment in the country and this reform and review of the Town Planning legislation is a very large part of that,” she said.

According to her, the recently released 2019 Doing Business Report showed that Barbados had fallen to 129 in rankings.  She noted that in the area of dealing with construction permits, Barbados ranked very low.

Ms. Caddle told the gathering that the draft Bill represented a fundamental shift of how they saw the role of planning and development in this country; its role in growth and investment; and its role in social and economic development in creating the required Barbados. 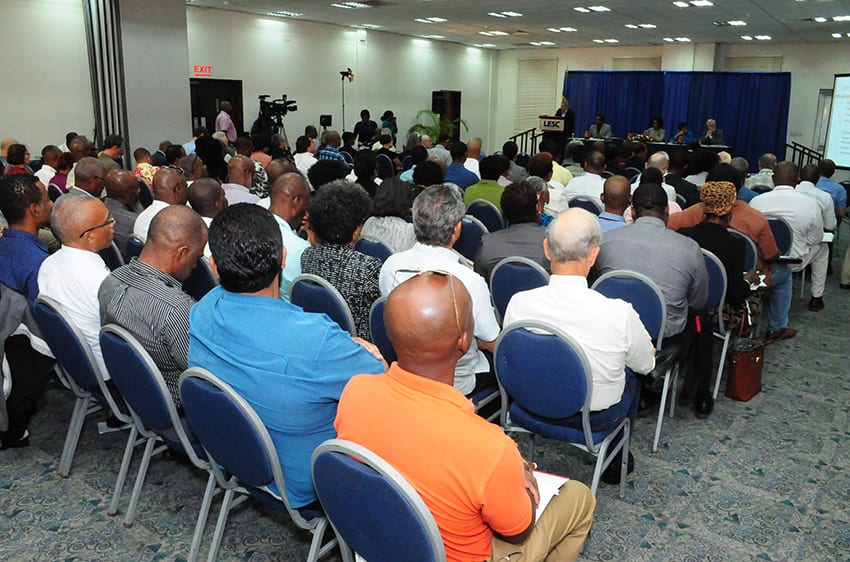 Participants at the opening of a Stakeholder Review – Planning and Development Bill 2019, at the Lloyd Erskine Sandiford Centre. (B.Hinds/BGIS)

“There are a few changes in the way we approach the idea of refusal and approval and one of those is the idea of provisional refusal.  So the notion that, rather than just giving a yes or a no, rather than just acting as a regulator, that the Town Planning Office is now cast through this new Bill as a facilitator of development…,” she pointed out.

She explained that provisional refusal meant that an applicant would be told that the application, as presented, could not be accepted for a range of reasons, but if suggested changes were made, then it could be approved.

“Information is important and it certainly is an economic good as it allows people to make key growth and investment decisions. So we believe the role of the Town Planning Office and the entire planning and development architecture is not simply to give a yes or no, not to withhold information that might help facilitate development, but to have a conversation with those who are interested in fostering development in this country.

“That is really the new orientation that you will see at different points throughout the Bill and that we think is a very important step forward…,” she stated.

Ms. Caddle stressed the importance of the Barbados Economic Recovery and Transformation Plan, saying that it was not just about fiscal adjustment.  Stating that Barbados could not adjust its way out of this crisis, she reiterated that growth and transformation were critical.

Ms. Caddle pointed out that the Corporate Registry was high on Government’s agenda for the first quarter of 2019, so as to allow individuals and companies to live and invest here.

Tags: Marsha Caddle, Minister in the Ministry of Economic Affairs and Investment, Planning and Development Bill