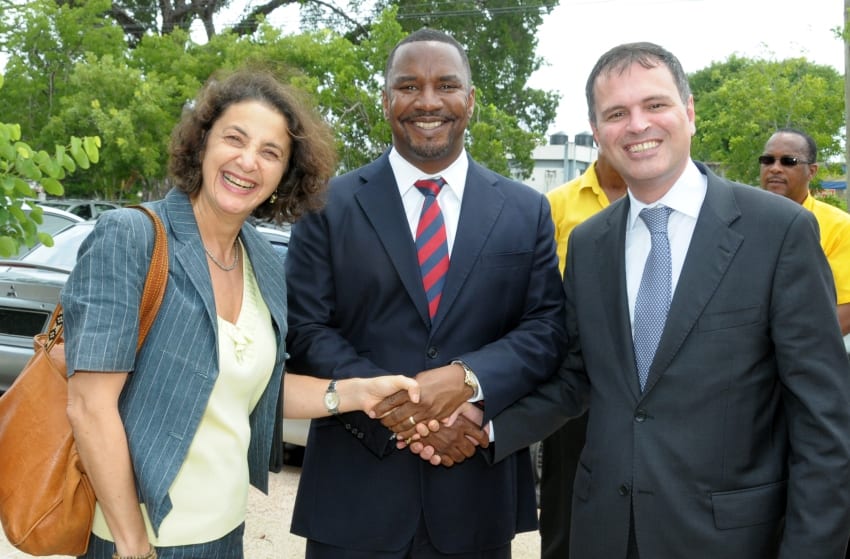 From left to right: Head of the EU Delegation, Daniela Tramacere; Minister of Energy and Water Resources, Wilfred Abrahams; and Vice President for the IDB Alexandre Meira da Rosa, shake hands after Mr. Abrahams flipped the switch on the new solar photovoltaic system at the Forensic Science Centre. The officials also visited the Frank Walcott building which is part of the Public Sector Smart Energy Programme. (B.Hinds/BGIS)

“Government is promoting sustainable energy practices within the public sector.”

Minister of Energy and Water Resources, Wilfred Abrahams, made the statement today, while on a site visit of the Forensic Sciences Centre and the Frank Walcott Building, where the solar photovoltaic systems are installed.

Noting that today’s initiative was a tangible stepping stone in that direction, the Minister said he was pleased to be able to commission the first solar photovoltaic (PV) system at the Forensic Sciences Centre.

In 20 years, this programme is expected to yield an annual savings of US $2.4 million, and over US $24.8 million net financial savings, as well as a reduction of CO2 emissions of 130, 617 tonnes.

Minister Abrahams highlighted that by the end of 2018, “2.6 megawatts of solar PV will be installed across 16 government buildings, including the Ministry of Education, Technological and Vocational Training; the Bridgetown Port, and Grantley Adams International Airport.

“Collectively, these solar PV systems are estimated to generate approximately 4.5-megawatt hours of electricity annually, and save 2,664 barrels of oil per year.  To date, 12 of these installations are substantially completed,” he said. Funding for the PSSEP is provided by the Inter-American Development Bank (IDB) and the European Union (EU).

Vice President of Countries for the IDB, Alexandre Meira da Rosa, expressed joy at seeing the project come to fruition and pledged his continued support of the venture.

EU’s Ambassador to Barbados, Daniela Tramacere, said she was energised to see the tangible side of the programme get off the ground.

She also mentioned that Government’s 2030 goal of being a 100 per cent green and carbon neutral island state is an ambitious one, but she believes that with “all hands on deck, that is, all the key stakeholders working closely together … the policymakers, the regulators, the private sector, and the donors/financial institution”, the goal will be achieved.

Minister Abrahams thanked both the IDB and EU for their assistance, and assured those present that Government was 100 per cent committed to its 2030 goal.

Ms. Tramacere said: “The EU will continue to support the Government of Barbados in its attempt to promote and implement the use of Renewable Energy (RE) and Energy Efficient (EE) measures .…  In addition to the grant for PSSEP, the EU is also providing support to transform the economy to a green economy, through the 11th European Development Fund Bilateral programme, in support of the RE and EE Sector in the amount of Barbados $7 million”.

Solar Watt Systems Inc. has retained the responsibility of installing solar PV systems across the government sector, and its Managing Director, Joshua Hunte, said that all of the work was being carried out by Barbadians.  He said the systems are built to withstand Category 3 hurricanes.