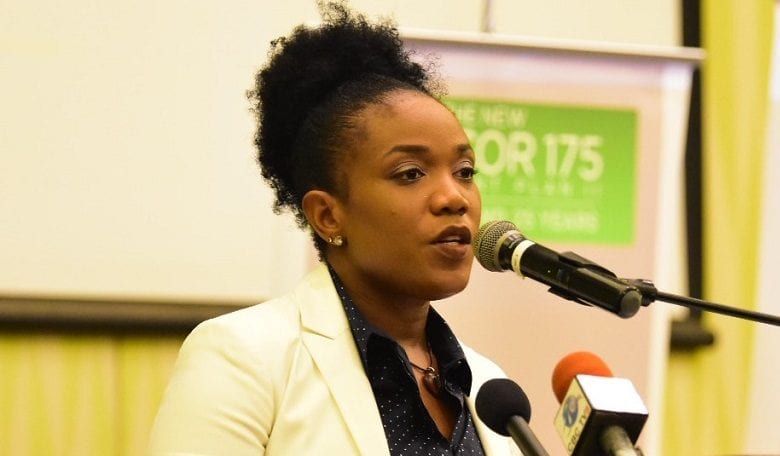 Minister in the Ministry of Economic Affairs and Investment, Marsha Caddle, speaking at the “Blast-Off” seminar held by the Barbados Association of Insurance and Financial Advisors. (C. Pitt/BGIS)

Government is moving quickly to turn Barbados’ economic situation around so that persons can once again be employed.

Minister in the Ministry of Economic Affairs and Investment, Marsha Caddle, made this known today, as she addressed the “Blast-Off” seminar held by the Barbados Association of Insurance and Financial Advisors at the Hilton Barbados Resort.

She stated: “We are not sprinting for show, we are running because we understand that many of our decisions will cause and are causing some pain and suffering.  And so, we …have to complete the job early so that the recovery can come early and we can get people back into jobs early.”

Noting that Barbados’ agreement with the International Monetary Fund (IMF) enabled the Ministry to quickly secure supplementary agreements with other multilateral development banks, Minister Caddle pointed out: “With their help and changing confidence in the private sector, our reserves rose from $400m in May to, as of this morning, $1,060 million. We saved the dollar.

“We settled one of the largest domestic debt restructurings as a per cent of the national economy in history. Our debt has already declined from near 170 per cent of GDP in May last year to 124 per cent this year. The IMF projects it will hit 60 per cent by 2033.  As a consequence of the change in the way we are managing our finances; our credit rating had its first uplift in over a decade. More is to come.”

Ms. Caddle also stressed that Government was committed to ensuring that Barbados never had to return to its current economic position. “We have made significant reforms to monetary and financial governance to ensure we do not get back here again. The printing of dollars that caused our reserves to run out has ceased. We are running a surplus for the first time in a long time,” she disclosed.

Pointing out that Government had successfully mitigated the high number of job losses predicted, Minister Caddle said that while Government knew it could not save every job it would “protect every Barbadian”. She added: “Those jobs may not look the same as they did. The future of work is changing in organization, [and] in flexibility.”