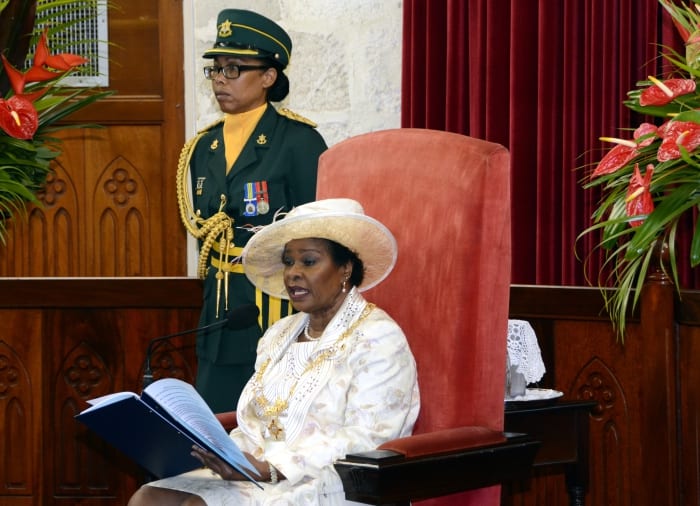 Government has outlined an extensive programme to correct several issues facing Barbados; realise the potential of new economies; and give citizens a greater say in their country.

Governor General Dame Sandra Mason highlighted some of Government’s key initiatives earlier today as she delivered the Throne Speech at the State Opening of Parliament, in the Senate Chamber.

Dame Sandra said Government would take immediate action to confront and resolve some of the urgent national challenges. “Our agenda will focus on addressing all Mission Critical issues. Clear timelines will be set for deciding on and applying solutions.

“Dedicated Mission Critical Teams, comprising public servants and highly experienced professionals, recognised nationally, regionally and, in some instances, internationally, will be established and tasked to ensure delivery. More important, proper management structures will be put in place to prevent these issues from reaching crisis proportions again,” she assured those present.

She stated that after extensive consultation with the Social Partnership over the last week, Government had started the process of restructuring Barbados’ public debt and renegotiating existing obligations.

She explained that in so doing, Barbados would seek the cooperation of its domestic and external creditors and the balance of payments support of the International Monetary Fund. She gave the assurance that Government would continue to consult extensively with the Social Partners in the development of a comprehensive Barbados Economic Recovery and Transformation Plan.

“This will ensure that the burden of economic adjustment is shared fairly and does not fall disproportionately onto workers,” she stressed.

According to her, the task ahead was not for the 30 elected or the 21 appointed, but for the 300,000 who lived in Barbados and those citizens living in the Diaspora.

Dame Sandra noted that Government would abolish the National Social Responsibility Levy, which would result in the lowering of the cost of living and stimulating consumer spending; eliminate the Road Tax and replace it with a more equitable but bearable tax on petroleum products; repeal the requirement for tax clearance certificates; revoke the Municipal Solid Waste Tax and give a tax credit over a period of time to those who paid; and return the Value Added Tax to a rate of 15 per cent within 18 months.

She also said Government would take immediate action to safeguard Barbados’ financial services sector, which had been a major contributor to the economy. She stressed that the team’s focus would be to settle the policy framework on international business by the internationally required deadline of December 2018, to ensure that Barbados was not again unfairly blacklisted as an uncooperative jurisdiction by the OECD and the EU.

“Thereafter, the team will assist the Government in its efforts to redefine Barbados globally as a centre of excellence for certain niche sectors in international business and for potential new strategic growth areas, where Barbados can develop a comparative advantage, especially as it relates to our quality of life and stability as a nation,” the Governor General added.